It should be noted that all five bags offer different storage capacities. Depending on the amount of gear a rider carries, some of these packs will be a better fit than others. I used the same gear in each bag and would venture to guess that most riders wouldn’t carry much more or less on a two- to three-hour ride.

The Hip Pack Race, Repack, and Hot Laps are very similar in that their main compartments are devoid of any internal organization. The Evoc and CamelBak packs do have a divider for the reservoir, but it’s debatable how practical this feature is. My vote is that it is not very practical.

The Evoc Hip Pack Race has a two-sided, tethered zipper flap allowing everything to be visible and easily accessible. I prefer mesh over solid pockets so I can see where everything is stashed. The Hip Pack Race also has a pocket on each end of the hip belt for maximum storage and accessibility for a total of six pockets.

Like Evoc, the CamelBak Repack tool pocket also unzips from two sides, but in a horizontal fashion. Inside are two deep, open pockets, each with a zippered mesh pocket on the flap. Both sides of the hip belt have pockets — one of which has a false closure for on-the-fly access — and daisy-chained webbing for attaching gear outside the pack.

The Dakine Hot Laps‘ tool pocket is a traditional top loader with four internal pockets of various sizes and closures. The longer pocket has a felt lining for a phone. Although it doesn’t splay open like the Camelbak and Evoc packs, the tool pocket is deeper and taller which makes it just as easy to access.

Only one side of the hip belt has a pocket with an overlapping closure just big enough for a small multi-tool. A daisy chain adorns the back of the Hot Laps if you need to clip on some extra gear, and a pair of nylon straps located beneath can be used to secure a jacket or hang knee guards during the climbs.

The North St. Pioneer 9 has a large main compartment and smaller outer pocket. Inside the main is a zippered pocket running the entire width of the bag with two smaller pockets inside. Opposite the inner pocket is a row of Velcro that attaches an internal pocket organizer which is sold separately.

The smaller exterior compartment is a simple pocket with no additional interior organization. At 2.65 liters of capacity, the Pioneer 9 is one of the smallest bags on the list, yet easily swallowed everything I needed to carry, except water of course. The durable sailcloth construction allows the Pioneer to maintain its boxy shape, making it easy to see and get to everything quickly. 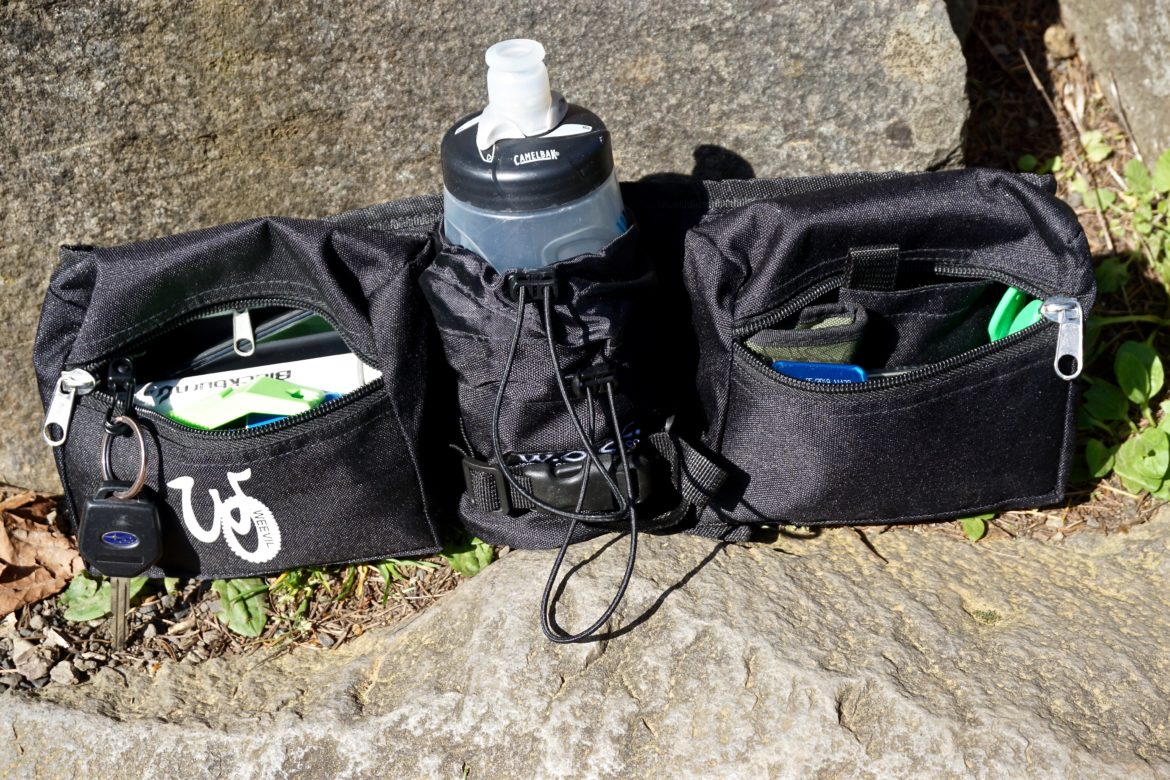 Despite looking like a smaller bag, I was stunned by how much gear the Weevil Burrosack was able to hold. It easily carried all the gear I used in the other packs and the lateral pocket placement proved useful for accessing items on the go. Although the pack has some inner organization, the Burrosack still lacks the number of pockets that the other bags have which, for me, is a bit of a deal-breaker.

While the fully expandable tool pocket featured on the Evoc and CamelBak packs is cool for sure, it actually doesn’t end up being any more practical than the top-loading pocket on the Hot Laps. I would argue the one zippered tool compartment design on the Dakine is better because there’s only one point at which dirt and water can infiltrate the bag instead of two. And even though you’re down one hip belt pocket on the Hot Laps, I’m willing to trade that for a row of daisy chain and a set of cargo straps.

Next up: fit and feel.

Progression
MTB Riding Position Breakdown: The How and the Why
Gear
OneUp Has Another Steerer Tube Tool Option With Additional Functions
Gear
Hunt Revises Enduro and Trail Wide Wheels, Still Retail Under...
Community
From Pup to Trail Dog: How we Prepared our Singletrack...
Subscribe
Login
Please login to comment
2 Comments
Most Voted
Newest Oldest
Inline Feedbacks
View all comments

It took over 30 years for the fanny pack to gain traction again.
If I live another 30 years, the new fanny packs will be marginally different like these I ‘spect.