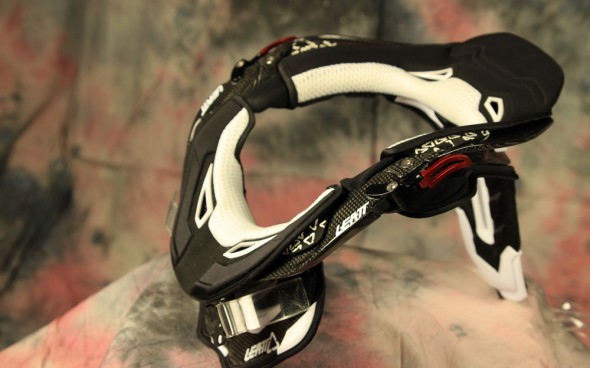 There is nothing scarier than hearing about all the injuries that have been happening lately when people really send it. Having progressed through different styles of mountain biking and finding I love gravity riding, I have also had more than my share of near misses. Having broken both my clavicles (separate crashes), torn my right ankle, broken both my wrists, and chipped a fragment off my left ankle, I have also encountered many a near miss with head injuries.

Not wanting to tempt fate any more, I decided to get some heavy-duty protection. One major upgrade to my gear was a new set of leg braces from FOX called the POD. But the other, and even more important, piece of equipment is a Leatt Brace.

So why is the Leatt so important? Well for one thing the Leatt brace represents a piece of technology that’s geared directly toward the rider’s safety in every way. With 360 of protection around the neck, it reduces the chances of whiplash and also prevents the following conditions:

Designed in 2001 by neurosurgeon Dr. Chris Leatt after witnessing the death of a motorcyclist from a severe neck injury, the Leatt Brace went through three years of R&D and testing to maximize its protective abilities and comfort without hindering range of motion or peripheral vision. In 2004, after giving up his medical career to focus on the brace, Dr. Leatt devoted an additional two years to bringing his invention to the marketplace.

The latest rendition of the Leatt Brace is the DBX Pro, which I decided to run–not because I am a Pro, but because I decided on the simpler, lighter version over the DBX Comp, which has a few extra adjustments that I decided I could do without. The Pro model is all-carbon and comes in at a scant 650 grams. 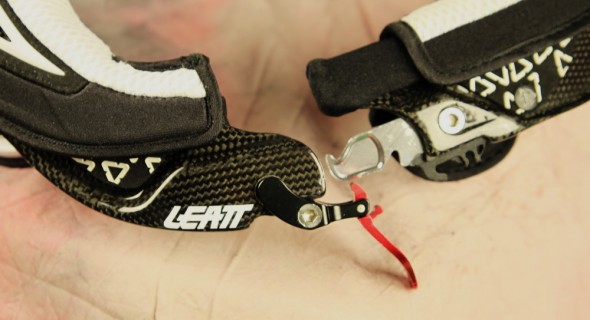 On the Pro you get cool-looking red anodized CNC-sprung hinges on both sides of the brace–perfect for either left or right-handed riders. Cleverly placed vent ports also act as stations to hold the padding, making for a velcro-free replaceable pad (no need to worry about the velcro wearing out any more).

In the box you also get a high-quality bag to carry the Leatt, as well as a tool kit and extra spare clips that allow you to tune the brace to fit you perfectly. 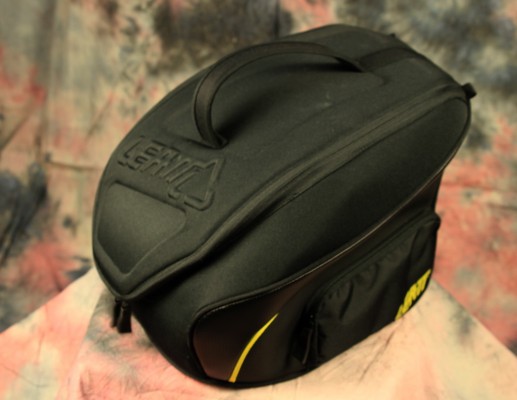 The picture below basically shows a breakdown of all the parts on a Leatt Pro. With only 7 major parts, it is easy to service, replace parts, and clean (when needed). The pads come out easy enough once you get the hang of it, and as mentioned above they don’t lose their ability to hold in place after repeated attempts at setting up and tuning. 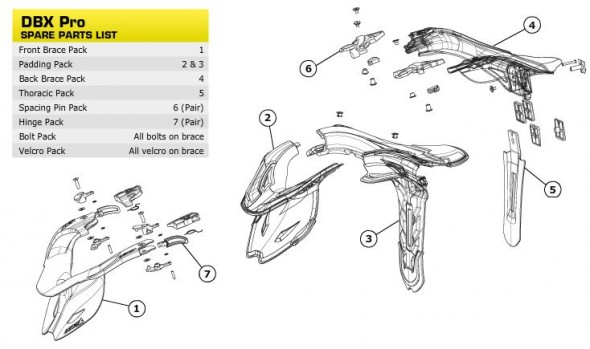 I didn’t need to make many adjustments to get used to the Leatt Pro. Other than one or two times when I had to fumble around with the double “D” rings on one of my lids, the Leatt barely felt like it was on–a true testament to its great design.

Not even the plate in my right clavicle came into contact with the brace, which confirms the brace is designed to avoid contacting the clavicles. This is very important as the clavicle is one of the most sensitive bones in the body and the easiest to break. 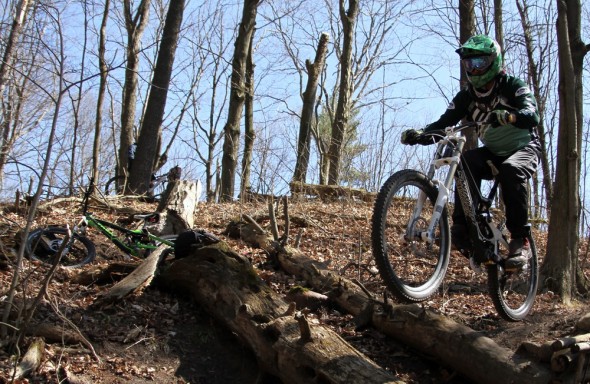 The jump right after the photo above saw me eating dirt–hard enough that I was out for a few weeks with a bruised quad and shoulder. I landed hard and had my bike toss me off and into some trees, basically head first but sideways, causing me to flex sideways along my leg, then strike the ground with the head. Pain in the leg… yes. Pain in the neck… no.

So do I think the Leatt Pro works as advertised and is worth the investment? I would have to say yes.

I am not one to shy away from devices that make your ride safer. In fact, having come from a motorsports background when you never know what could happen, I was always concerned about safety, so this fits right in. Is the Leatt Pro worth the $699 price tag? Well, if it saves you from a life in a chair or a lengthy time in a hospital, you tell me.

Now if $699 is too spendy and you still want protection, then check out the DBX Comp III for $399 or the Ride II for $299. Both work as well as the DBX Pro but are a bit heavier and are made of different materials.

Overall, a person who rides gravity should really consider spending their dollars on a device such as this one. In fact, many of the manufacturers today are making provisions on their cheek protectors and pressure suits to accommodate the Leatt. It seems they have seen the benefits of the Leatt in action as well.

I would like to thank the folks at Leatt for sending down the DBX Pro for a review. Check out Leatt’s website for more information.

I’m not really familiar with market for body armor so I’m a little shocked by how expensive this brace is (even the entry-level model).

Are there safety certifications involved here (like with helmets)? Clearly you can’t put a price on safety, particularly when you’re dealing with the potential for very serious injuries. Still, for that kind of $$ I would feel better if there were some indication of its efficacy or a set of standards to show that it’s safer than going without.

I can certainly see the point of gear, and I haven’t been shy about spending $ when I want a doodad. Would you consider this and body armor strictly for down hill/free ride? In my more trail riding oriented life I like to go grannie and grab brakes when I get going fast, and yet I have had lots of scrapes and bruises, even a small shiner from an endo. I’m absolutely ready to get some knee and shin pads, and maybe elbow.

This unit is worth the money….After all how much does it cost when you incur a neck injury?

ON the Leatt website there is further clarification on testing and design of the Leatt brace.

Now from a racecar background, right about the time when they were introducing the Hans Device, I too had people question that piece of neck protection as well….
With the Hand I too am a big fan….

Heck any form of protection, if it works, and lets you the rider focus more on the ride than your personal safety (even though safety should always be a concern) then I am all for it.

Agreed, it’s worth the price – and more – if it works.

From the video it sounds like they’ve done a lot of internal testing but I didn’t hear any mention about standards or third party test results. They do mention working with SFI to develop standards for unrestrained neck and torso protection devices but that is still ongoing. I guess the market is still so new there isn’t a lot out there (yet).