Black Friday often brings to mind hordes of shoppers fighting over electronics down at the local big box but for those of us who are into mountain biking, it’s can actually be a great day to hit the trails! Still, if you’re hell bent on finding mountain bike gear deals tomorrow, there are places you can go. Or you can just ride all weekend and wait until Cyber Monday. 🙂 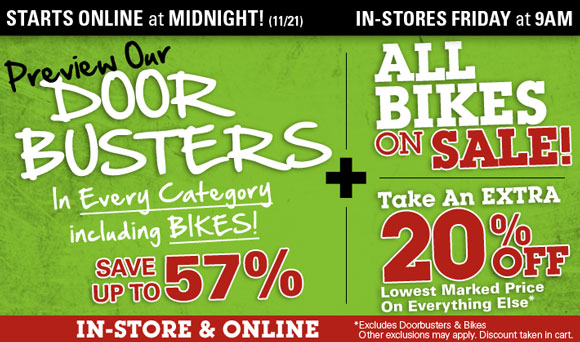 Performance Bike is offering the closest thing we could find to a true Black Friday bike shop experience with “Door Busters,” all bikes on sale, and 20% off everything else in the store. Doors open at 9am which is an hour earlier than usual (for my local store anyway). There are also online deals that went live at midnight last night.

A quick check of my local bike shops and a few well known shops around the country shows mixed support for Black Friday. Decatur Bikes won’t be opening early for Black Friday but they will continue to offer 2012 bikes at 20% off. Mellow Johnny’s in Austin, TX is similarly discounting all bikes this weekend, from 15-40% off (excluding 2013 Santa Cruz bikes). Still, it’s worth checking with your local bike shop to see what kinds of deals they’re offering.

REI is in the middle of their “Winter Sale” and there are a few cycling deals to be found, though mostly on commuter-friendly gear.

JensonUSA is offering both Black Friday and Cyber Monday deals this year but for now you need to sign up for their email list to get the skinny. If history is a guide, there should be some pretty amazing deals to be found this weekend.

Competitive Cyclist is hosting a “Thanksgiving Sale” where you can find deals on pretty much everything for your rig. Like 50 bucks off 2013 Shimano XTB BR-985 brakes and 50% off Crank Brothers Cobalt handlebars.

Price Point is running their “End of the Year Blowout” but let’s face it, they’re always blowing things out. Still, might be a good opportunity to pick up a few things on your wishlist.

Bike Nashbar is offering an additional 20% off every order over $50 through Friday, though some restrictions apply. Use code 72635 at checkout.

Also, REI is discounting all REI-brand outerwear 50%. I didn’t see much that was bike specific but there are some good rain jackets and vests that might work on the bike.

Look like Cambria Bicycle Outfitters has some Black Friday deals going on:
http://goo.gl/8GSXG

And use code bfship for free shipping.