I took part in my first XC race over the weekend: the 6th Round of the Ontario Cup at Mountainview in Midland. It nearly broke me, and I loved every lung-burning, testicle-crushing, breakfast-losing second of it! 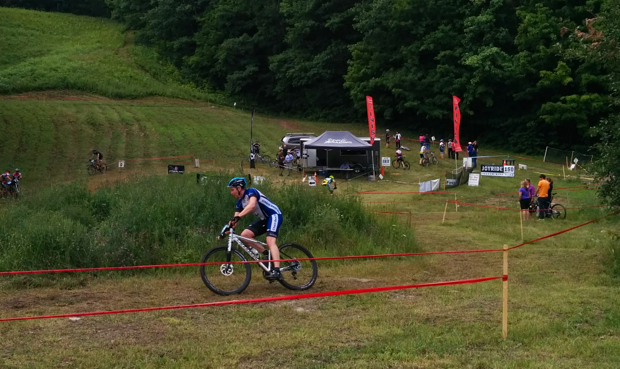 Right from the start line, even the speed of my fellow competitors in the lowest male division blew me away: the top two guys went out of sight within a minute and I never saw them again.

Doing my best to hold what felt like a decent pace, I was winding through the trees on some nice, fast, rolling singletrack, and overtook a couple of other racers. The motivation of not feeling like the slowest person out there was helpful, but it didn’t last long.

Anyone that’s ever ridden with me knows that I’m not exactly a fan of climbing: I’’ll do my damndest not to let a hill beat me, but on my normal weekend rides I’ll beat that hill at my own pace. That wasn’t really an option. 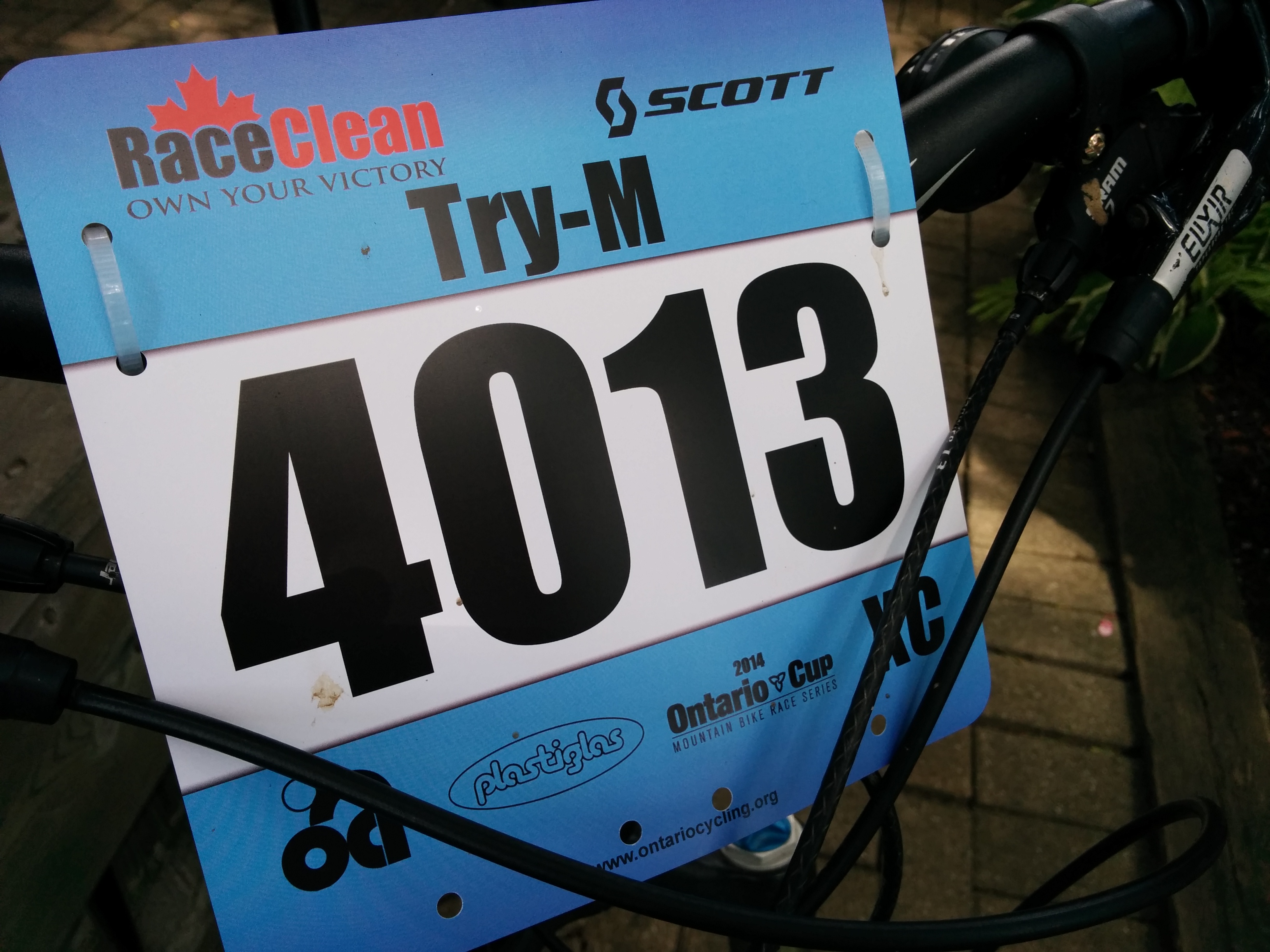 The course was on the slopes of a small ski hill and when the first climb started, I dug deep and tried to hold as much speed and momentum as I could. The trail was greasy, the climbing switchbacks seemed endless on that first lap, and this is where I learned my first racing noob lesson: large quantities of beer and pie do not make a perfect race-prep meal the night before.

As I reached the course high point, everything hurt, from my legs to my lungs to my head, and while cresting a rocky section right at the top my tired legs betrayed me and I slipped forward, squashing my groin on my top tube.

I tried to push through the agony but had to stop, and it was only after being re-introduced to the two bananas I’d had for breakfast that I was able to carry on.

I passed one more guy near the end of the first lap, but that was the last time I’d be the one doing the overtaking. 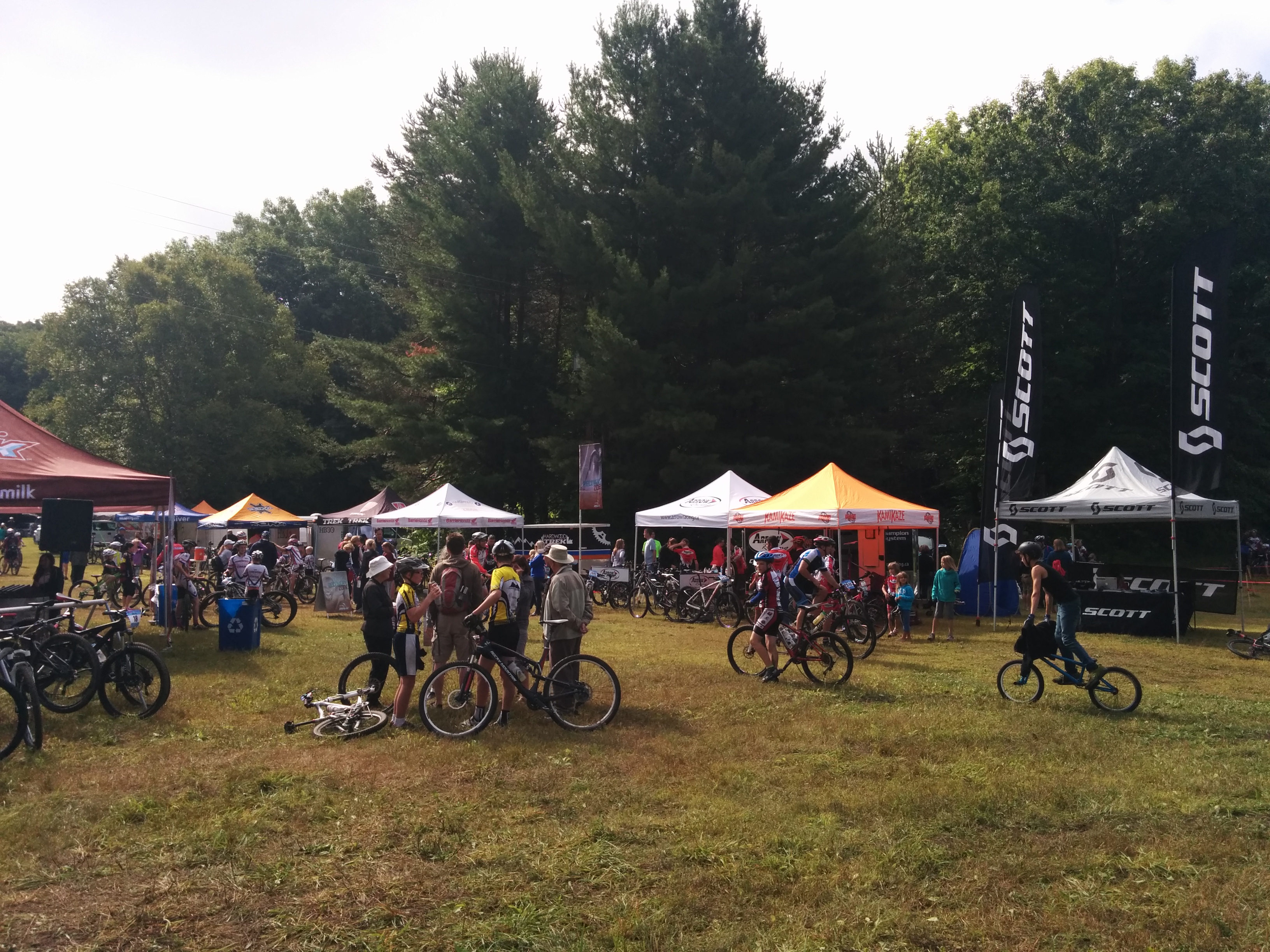 As I came through the start/finish and went back out for lap two I was feeling ok–I knew what to expect from the course. I’d dismissed the opportunity in favour of more time in bed, but pre-riding the course is essential. Knowing when that climb will end, or where that rock is on that tricky turning descent helps you keep focused and improves your racing line.

Halfway through my second lap, I started to get lapped by the front runners of the higher divisions who were now on their third time ’round, and almost without fail, every one of the ten or so guys that passed me had something encouraging to say. “Great climb,” “keep that speed,” “you’re almost home,” were all things shouted at me as they flashed by, and that would be my third lesson for the day: the racing community is amazing. From the people I didn’t know cheering for me, to the guys I met on the start line who found me afterwards to see how I got on, to the supportive marshalls with cowbells and trumpets, it didn’t really feel like I was there on my own.

As I crossed the finish line I was tired, sweaty, almost dead-last, and on a total high. The only thing I regret is not starting racing sooner in the season–unfortunately there’s just one more O Cup race left this year.

Your Turn: Have you tried racing before? If so, what did you think? If not, what’s holding you back?

Oliver is a member of the Singletracks Trail Team and is based in Ontario, Canada. 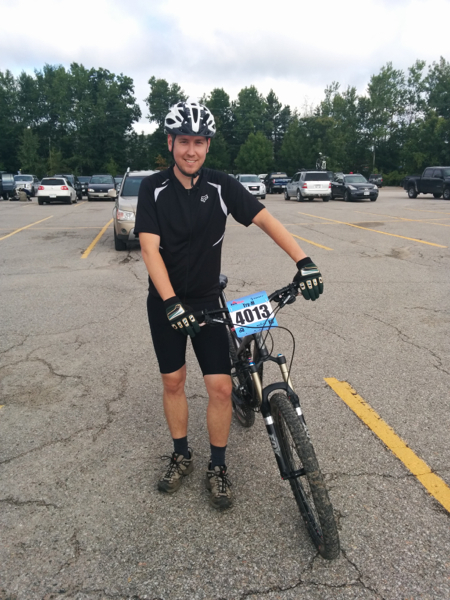 olimoo
Fell in love with my first mountain bike in the early 90s and have been hooked ever since. In the last few years I've ridden on three continents, there's definitely something special about exploring new trails for the first time.

I too participated in my first race recently, the wildwood games.30 miles plus a little extra due to some operator error, as it were. Would I do it again though? Of course! Did it almost kill me? Oh yes! Did I podium? Hell no! But it was a lot of fun, and that is the main thing. It gives you an idea of where you stand amongst your peers too.