I was looking forward to the Blankets Creek Duathlon for months because I knew signing up for the race would force me to get out ride my bike more. I was only able to pre-ride parts of the course two days before the race and even though Blankets Creek is a local trail, the pre-ride was my first time riding the infamous Van Michael Trail. For those who aren’t familiar, the VMT goes up and down and up some more and is one of the most challenge trails at Blankets Creek. I was hoping for rewarding downhill but most of the descents were rocky or slowed down by switchbacks… or both. 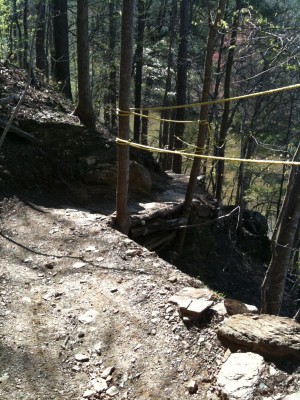 On race day I had to push aside thoughts of wishing I had trained more and all the other shoulda/coulda/woulda’s that entered my mind. There were a lot of serious competitors among the 260+ racers, but the majority of mountain bikers I met were there to finish and have fun. All the chatting and meeting other racers, especially the women, before the race was a great way to calm my nerves.

Any remaining nervous energy got burned off during the initial trail run. The duathlon started with a 5-mile trail run on the Dwelling Loop, and being a runner and former marathoner, I definitely preferred running before biking. After the first mile and a half I realized my heart rate was way up after I nearly tripped on a root. I was passing folks on the singletrack and feeling the pressure of other runners behind me so I decided to settle in with a few other ladies that were going about the same pace I was. Soon after, over my left shoulder I heard, Cmon, youre not satisfied. She was right – in the back of my mind I was saving my legs for the Van Michael Trail, but it takes more than 5 miles of running to wear me out. So I gladly let the woman by and stuck to her like glue the rest of the way.

The running pace was perfect, a little faster than I would have run if I were running alone. We even caught up to my new friend, Cathi, an experienced ultra-marathoner. At that moment I started thinking negative thoughts, I need to slow down, Im going way to fast, Cathi should be running circles around me! But I decided to make my move. I felt a little guilty about trading places with Cathi but I wanted to run as if I was only there to run the 5 mile trail run; I’d worry about the biking part later. I was so glad to be reminded early on that racing is often more of a mental challenge than a physical one. I finished the run in 44:16 and was one of the first 5 women into the transition area.

I hurried through the transition, gulped down a Gu and a bottle of Accelerade, switched shoes, slapped on my helmet and hydration pack and bolted back onto the trail with my heart rate still approaching maximum velocity. I had 12 miles on the bike to look forward to so it helped to think about it in pieces. First up, ~4 miles on the Van Michael Trail.

It took a while to get into the groove of climbing and I became frustrated when riders in front would stop in the middle of the climbs, forcing me and others following to do the same. This happened a lot on the VMT and I suppose it’s partly my fault for following too closely.

At one point I tried to pass a group of bike-hikers on the left side when I found myself out of space and momentum. I tumbled about 15 feet down a cliff still clipped into my bike like a fly on flypaper. I picked up some scrapes on my shoulders and legs but the worst part of the fall was one of my calves cramped up. Fortunately a couple of nice gents fished me and my bike out of the brush. I think I was cursing out loud by now so I hope they didnt take offense – I really did appreciate the help!

I stretched my leg out and pushed my bike up the rest of the hill and for a few minutes thought, what a waste, I might as well take my sweet time riding now. I was sooooooo mad! Then I thought to use all that anger to my advantage, so I pedaled like a mad woman. I was having crazy thoughts now. I wanted to blast down that stretch with the ropes (pictured above), but fortunately there were some folks from the race crew there telling the riders to take it easy.

By the time I got onto the next section of trail, known as the Dwelling Loop, I was still mad. Dwelling looks a lot different on a bike than on foot. You dont notice the little rocks as much so its actually a pretty fast ride, at least for the first mile. Everyone seemed to be spaced out better on Dwelling and whenever I found myself alone, I pedaled harder to catch the next rider and make up time. Before I knew it, I was back with some of the racers I had seen before my crash.

We turned onto South Loop and the pace slowed a bit. South Loop is not like any of the other Blankets Creek trails, and of course this is the section I left out of my pre-ride. There was a lot of narrow, twisty singletrack through pine trees. Not knowing what else was ahead, I just told myself theres less than two miles left so its time to ride until I puke.

When I saw an opportunity to pass the female rider that I had been behind for the last several miles, I bolted past only to come around the corner to a slow granny gear climb. I fell again going up a short technical section because I was distracted by a rider sitting by the side of the trail. What was he doing there? Did he puke? Am I going to puke here? I was totally embarrassed as I was passed back just seconds after getting in front of the woman. I hung onto the woman as long as I could, wondering if I could out-sprint her when we made it back to the doubletrack.

Before I knew it I could hear the race crew and spectators through the pine trees and I knew we were coming out of South Loop. I was over-anxious and started frantically mashing the pedals and, doh! my handlebars clipped a tree. Down I went for a third time and in front of so many people!

I finished strong knowing I ran and rode my hardest. My final time was 2 hours 11 minutes, and I was shocked to win my age category (the woman I was chasing ended up being in a different age group) and I finish 5th overall in the women’s race! 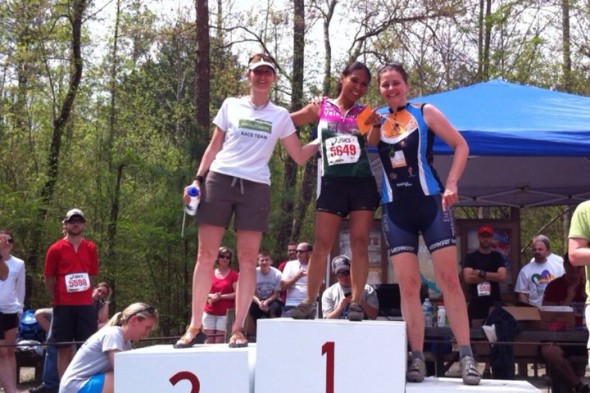 Its two days later and Im still a little sore from the crash, but certain Ill do another dirty duathlon. A big kudos to Lisa Randall and SORBA Woodstock for putting on an awesome event. See you at the Rope Mill Duathlon!

Leah Barber
Not much is known about Leah Barber, though the legend grows each day.

That was a great report. And congrats on the win!

+1 to what seenvic said! Big congrads on the win, that’s great! I also loved how you talked about all the emotions you went through, that’s the hardest part of a race: the mental game.

Congrats on the performance!! Great narrative as well, really got a sense for your racing experience. Best of luck in the next race!

Congratulations, and great report. Makes me want to sneak out of the office and get in a run/ride…

Congratulations and great job on taking first. I was going to hit that trail with a buddy of mine but thankfully i saw that the duathalon was occurring the weekend I visited.