Nothing is more exciting, outside the physical act of riding your bike, than dreaming of where you’ll ride it. Whether it’s a week in Whistler or a day at Duthie, from backcountry epics to bike park sessions, our sport has a wealth of options. As we approach the transitional season, we can start weaning our eyes from bike POD and VODs, finishing up those builds, and planning how to make loamy dreams become ripping reality.

This week, as we discuss bike trips, travel tips, and other self-propelled two-wheeled affairs, I encourage you to impart your 2015 plans as I reveal mine. My objective here is three-fold: get you as excited about your season as I am mine, give you something to look forward to reading in my full reports later this year, and, in a selfish act, solicit any input from those who’ve been to where I plan to ride. 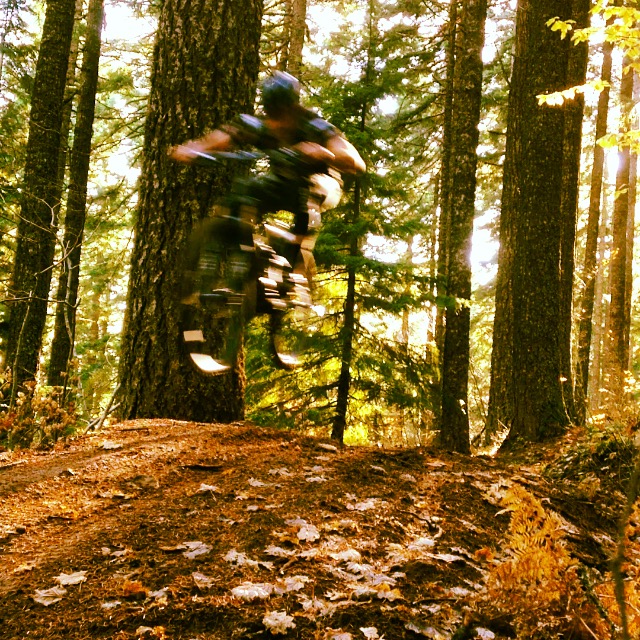 Due to perceived high standards and lack of universal definition, I try to use the “D” word sparingly. In my mind, a mountain bike destination is only second to becoming a “mecca” and to be crowned such seems akin to bearing one of the nineteen rings. While I am certainly in no official position to dole out such a title, I have high hopes in 2015 to bring to your attention a potential destination that has been under the radar for far too long. Situated in the shadows of Mount Hood, on the banks of the Columbia River Gorge, about an hour and change east of Portland, OR, is the quaint-as-quaint-gets town of Hood River. In terms of outdoor recreation, you may have heard of “Hood” referenced for its world-class wind surfing and kite boarding, but did you know about the 250 miles (maybe more) of singletrack within 45 minutes of town? That’s not including the 40 miles of lift-served riding at Mount Hood’s bike park! 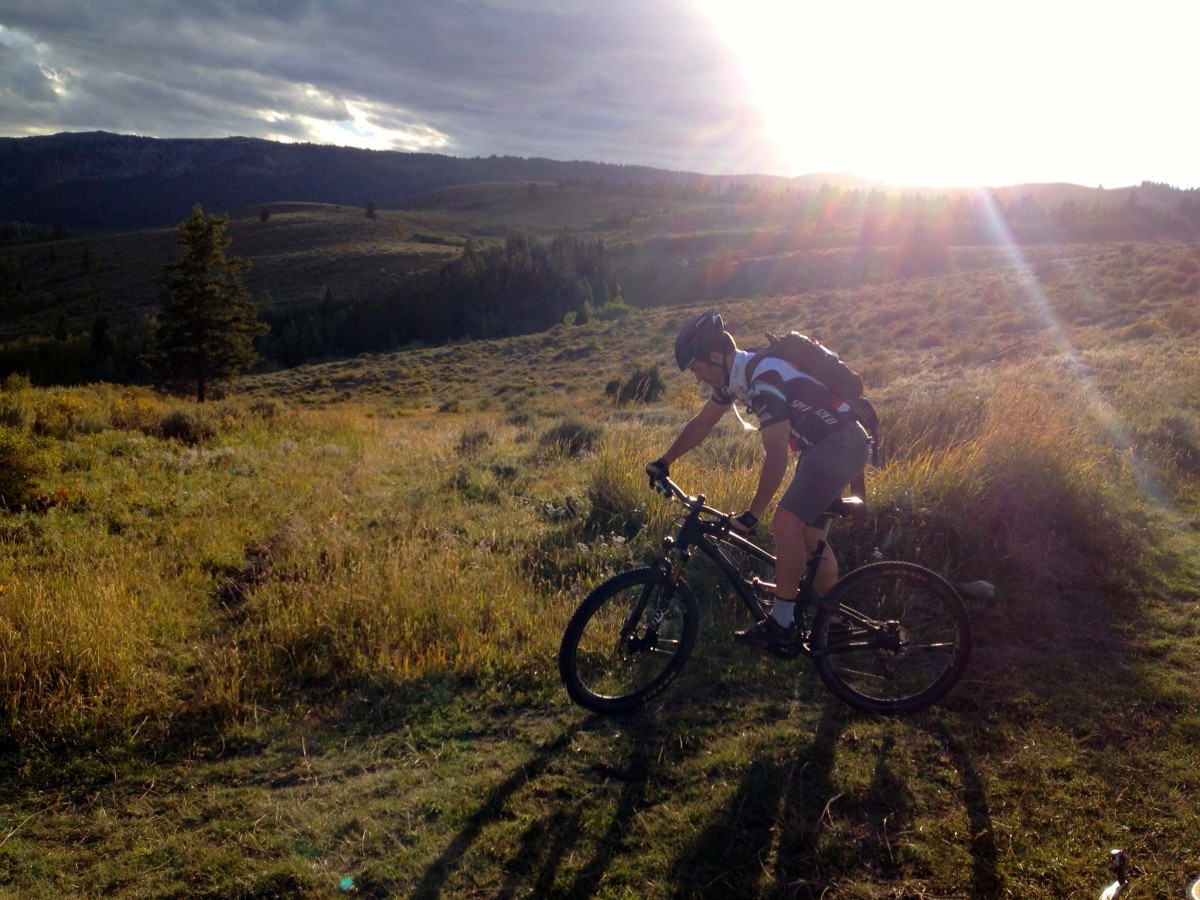 You know Jackson, WY as a legit mountain bike destination boasting over 300 miles of trail within 25 miles of town, but do you really know “DAHO-le” picture? Within Teton Valley, ID, Singletracks currently documents about 70 miles among 10 trails, but I’ve tapped into a network of trail slaying bliss just west of Driggs that will enrich your next trip to the Wydaho border. 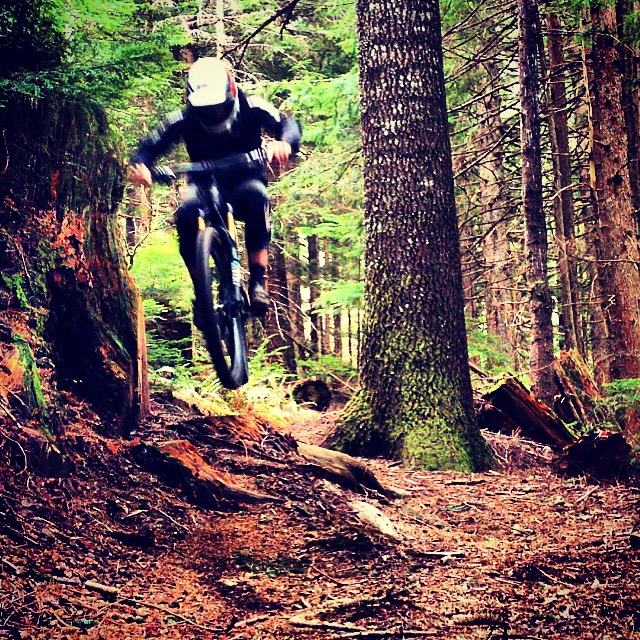 What is it like descending 17,000 feet on a mountain bike in one day? I don’t know, but I’d like to, and Oregon Adventures will make that happen with their 17K Vert In A Day shuttlefest. Choose one of four days throughout the summer to ride over 40 miles on six different trails in Oakridge, OR. While you will earn 3,500 feet of those miles climbing, it’s a small price to pay considering the gravity-assisted portion the size of Mount McKinley. In addition to multiple shuttles, the tour fee of $159 gets you lunch (with a vegetarian option), snacks, professional guides, a T-shirt, and a dip in the river afterward. If you can’t make one of their set dates, just grab four friends and arrange your own shuttlefest with Oregon Adventures.

Have you hauled mail in Hood River? Are you tearing up the Tetons? Are you ready to sink 17,000 feet? If you’ve been to these places, what say ye? If you haven’t, what more do you want to know? Or, if you already have your sights set on somewhere else this season, peddle us your plans and tell us why you’re going where you’re going.

As I’ve mentioned on previous posts, my biggest issue is while I have many circles of friends that ride local, getting them on a “destination” ride of 3-4 days is much more difficult and a week or more is nearly impossible. That being said, I have a few trips planned so far but only one that will be of an “Epic” nature….
1) Going back to St George/Gooseberry Mesa for (4) days
2) Durango/Cortez for 10-12 days, annual trip to visit family and will ride every other day
3) But the one I’m really looking forward to is 10 days of riding in Oregon. Two days in Oakridge, there days riding the North Umpqua with Cog Wild and then four days in Bend with a couple days of rafting thrown in!!

I still don’t have all my 2015 plans dialed, but two of the things I’m most looking forward to this year are a week and a half riding in Gothenburg, Sweden (a sure thing) and 4-5 days riding the Colorado Trail outside of Durango (a likely thing). Lots of other plans in the hopper, but regardless of what happens, I’m stoked for this summer!

Currently on the books:
Trip to Sedona, AZ with an extra trip down to Tucson (currently pushed from end of March to sometime in October)
Trip to Bend, OR in the end of May
Trip to Colorado (Glenwood Springs?) for a few days sometime this summer ( very tentative atm)
Hitting as many stops as possible in the Montana Enduro Series
Helping host a local race (not an epic, but it takes a ton of planning!)
And a newly added one: 17k in a Day shuttlefest–thanks for the info, I hope you don’t mind me stealing it!

Consider it my gift to you. Hope to see you there.

I forgot to add the Butte 50 race, maybe that’s because I’m trying to block it out. My goal is to finish but we’ll see how far I get 😆

Thumbs down for the 17K in a day. Trails that get shuttled tend to get trashed, earn your turns and don’t be part of the Enduroization of trails.

What makes you say shuttled trails get trashed? I don’t have any shuttle-able trails near me so I’m a bit in the dark.

I think it’s more a function of trail design than shuttling. Sure, some shuttle runs show a lot of wear, but I’ve also ridden numerous trails which are traditionally shuttled which showed no more damage or abuse than the typical cross country trail. Winsor in Santa Fe and South Boundary in Taos come to mind. In terms of being “trashed” even the ultimate shuttle, Porcupine Rim, looks no different than any other Moab trail.

Although I generally prefer to “earn my turns,” I do have a couple shuttle rides planned this year:
Downhill trails at Bootleg Canyon, Las Vegas, NV.
BLT to Noble Canyon, San Diego, CA.

Based on the riding I’ve done in Oakridge, it seems like there you NEED all that shuttle traffic to keep the trails open. Maybe I’m wrong, but the trails I rode there that weren’t shuttle-able were heinously unkempt and overgrown. Sometimes shuttle traffic can be a really good thing.

John, Porcupine has a lot of rock – I wouldn’t expect it to show the same wear of a dirt trail, especially a West side of the cascades dirt trail. BTW, never shuttled Porc myself.

Jared, the trails near Seattle that are shuttle able see big groups doing runs all day long. Many of these trails have dramatically deteriorated in recent years as they have gone from multi use trail to enduro training grounds. Braking bumps, ruts, and corners being cut and straightened, all of which are accentuated more by multiple runs per day. It is VERY noticeable that the same doesn’t occur when the high point of the trail can’t be accessed by car.

Greg, Oakridge is unique in that in has a LOT of miles of trail and needs more traffic on some of them than it gets. I think what you’re saying is that people should broaden their horizons, use their pedals, and ride more than just the shuttleable trails. Trails where shuttling is justified in that general proximity: McKenzie river, Umpqua River (2 days is probably ideal – tried an ill fated 1 day attempt and wouldn’t do that again), Dutchman/Met-Win/Mrazek (Bend), Bunchgrass – which I’ve yet to do.

Acree, So the shuttle-able runs get trashed due to the increased use? That makes sense. We have the same issue here (Central MT). The trails closer to the TH have more user damage–braking bumps, ruts from riding when too soft, cut corners–than the trails farther out. I guess one good thing about that issue here is it makes it easier to fix everything since one doesn’t need to lug the tools 10 miles out before getting to the problem area. (Not a very good silver lining, but I’ll take what I can get.) Thanks for clearing it up for me.

John, I also agree with earning your turns, it makes them “taste” much better. I feel the same is true with trail maintenance!

Not just increased use, the nature of the use. For the trails I’m thinking of, those that rely on vehicular transport to the top seem tor rider heavier rigs, focus on DH, and are way harder on the trail than a typical XC rider. IMO, this will ultimately have a cost to trail access.

Yes, it may be easier to access the problem areas for trail work. Doesn’t seem to increase workparty turnout much though…

I think you have a good point, ACree, but I mainly picked 17k shuttlefest because I just moved to the PDX area last summer. I’ve never been down there so it would be nice to have a guide, can’t do MBO this year, I like riding with others but have few riding buddies yet, and saw it as a nice way to see the most trail in a shortest amount of time. I do agree that shuttle trails get hammered a more, but trail abuse also has to do with skill and style. Endurbros will cut lines and shred (harmfully) as we see at Sandy Ridge all the time, but this is a fun ride and I won’t be out to take any KOMs.

The “gnarlier” trails around here generally fair better than the easier trails. The more difficult ones see less use, especially when the conditions aren’t favorable for decent traction.

We’re heading back to the Midwest for Memorial Day week. Levis, Chequamegon, and Duluth are on the itinerary. Really excited to get back to some tight, tree-lined singletrack.

Touring Oregon for Labor Day week. Haven’t quite worked out exactly what to ride yet.

St. George and Hurricane this weekend (birthday!) but I don’t count this as an epic since we do this or Moab/Green River at least once a month.