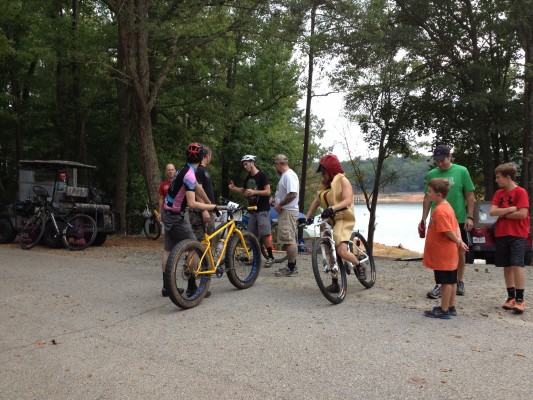 Yeah… it’s not exactly a super serious results-focused event.  It was however, an awesome weekend of bike riding, racing, and fun-having.  I made new friends, rode a new trail, ate some bacon, and got to push myself way harder than I have before.  There were families, dogs, camping, bikes, food, a hot dog costume, a ridiculously fast fat bike, and lots of friendly people.  What’s not to love?

The race was at the relatively new trail at Paynes Creek Campground in Hartwell, GA and hosted by the Faster Mustache team (proudly sponsored by Singletracks).  Saturday was the short track and the night time trial.  The short track race was up first, and did a really good job setting the stage for how hard the racing would be (very).  It was a single elimination bracket style format – four racers at a time, one lap on a very short course through the campground, the top two move on the next round, the bottom two are out. 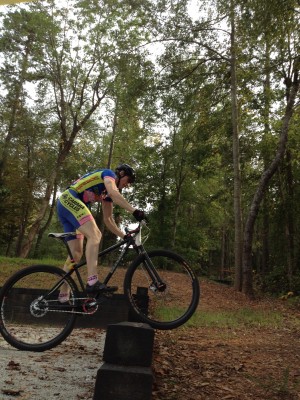 The course was short and technical – a few drops, several step ups, gravel, dirt, pavement, and even a super sandy beach.  It was a mix of mountain biking, cyclocross, and BMX – to do well you need a strong motor and excellent handling skills.  Stereotypical roadies need not apply.  Lap times were around 3 or 4 minutes I think. 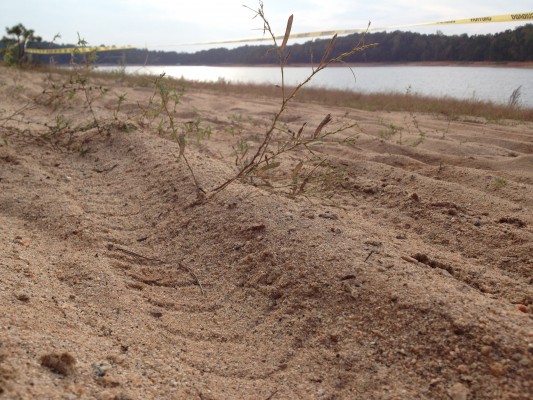 The beach sucked for pretty much everyone except the guy on the fat bike.

I got knocked out in the first round.  I held third most of the lap, briefly moved into second, then got passed on the beach when I tried to ride instead of dismount and run.  I couldn’t get back into 2nd, so I was done.  That left plenty of time to get some pictures though, after I got my heart rate down and the vomit out of my throat.  To say the pace was “really really hard and fast” would be an understatement. 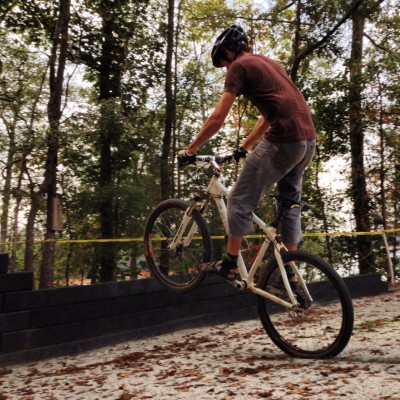 Eric Nicoletti takes the high line in the short track race, which he won.  He also took the overall win and is the 2012 Georgia Single Speed Champion.

After the short track everyone got some food and hung out for a few hours.  Once it got good and dark, everyone changed back into their riding clothes (cut off jean shorts and no shirt for several of the guys, one of the Faster Mustache guys raced in his team kit and a Spiderman mask) and met up for the time trial, which was one lap on the singletrack. 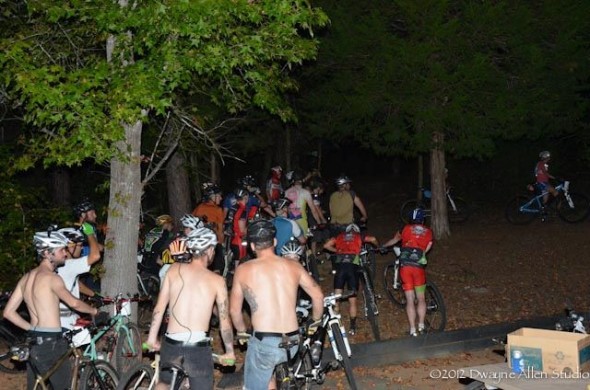 This was my first time riding the trail, but I knew what to expect.  It was built by the same folks who built FATS, and I had been told it was very similar.  Tons of flow, lots of speed.  It didn’t disappoint – the trail was very, very fast.  I had a good ride, finishing the 7-something miles in 34 minutes and change, good enough for 3rd in my category.  After the time trial I climbed into my tent and got some sleep.

Sunday was the cross country race.  Everyone started in one big group down in the campground and rode 9/10ths of a mile of pavement to the trail.  I was racing in the sport class and had to do two laps of the trail, some classes had to do three.  I didn’t push really hard on the pavement because I could still feel Saturday’s hard efforts in my legs, and I didn’t want to blow up before we even hit the dirt.

Shortly into the singletrack however I was nicely warmed up and got into a rhythm.  It was a fun race, I was always in a train of riders, and we were flying.  With everyone on single speeds passing was tough – the trail was wide enough, but I just had a hard time finding places I had enough time to get by someone before we got into a corner.  It’s not like I could shift to the next gear and go.  I pretty much rode flat out the whole race, hoping I wouldn’t blow up before we were done.  I was always right on someone’s wheel, with someone else right on mine. 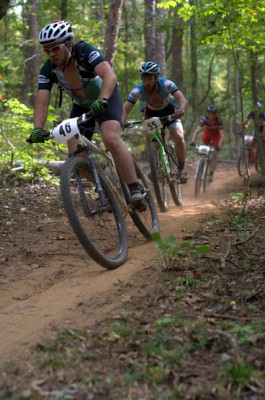 Seriously, there was always someone on my wheel.  Photo: Nik Fedele

I passed a few people, and didn’t get passed by anyone.  It took me an hour and ten minutes to ride the 15.5 miles – 13+mph average speed, that’s fast for me!  I was glad I didn’t have to do another lap.  I finished in 4th for my class.

The weekend wasn’t just about racing, it was about hanging out with like-minded people who all have the same addiction – mountain biking.  In no particular order, here’s some of the moments I really enjoyed. 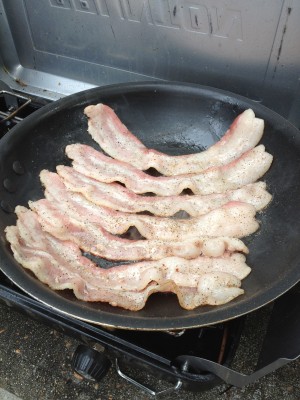 Morning Bacon – Kurt was one of the guys I shared a campsite with, and Sunday morning he fried up some bacon, which he was kind enough to share with everyone.  Bacon, outside, by a lake.  Yeah, it was good. 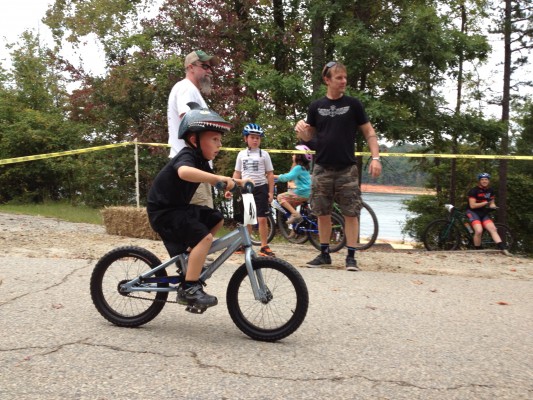 Kids Race – I got there just in time on Saturday to see the kids race, they’re always fun to watch, and seeing them have so much fun is a good reminder of what riding is all about. 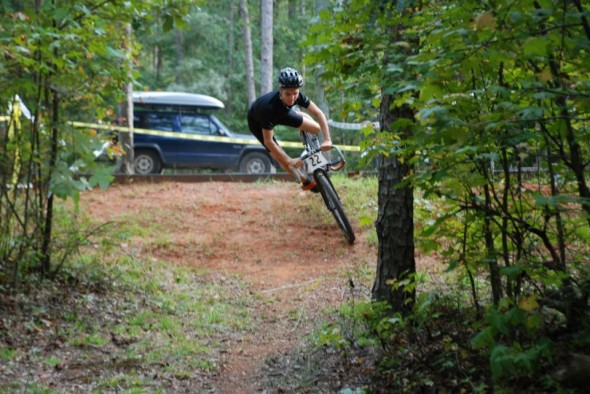 One of the youngin’s with lots of skill.  Not the best pic, but hey, the kid was racing on a fat tired, drop bar, brakeless fixed gear.  YES – a fixie, with no brakes.  And he was fast on it too.  A fall here and there can be forgiven I think.  Photo:  Eric Burke

Fast Kids – there were a few young/junior racers who were crazy silly fast.  Drew Witworth is one of those guys, and he took 2nd overall in the night time trial!  These guys are the future, and the future is fast.

Custom Awards – the gentleman who won several of the sport class races was awarded with a bag full of sand.  Everyone had a good laugh. 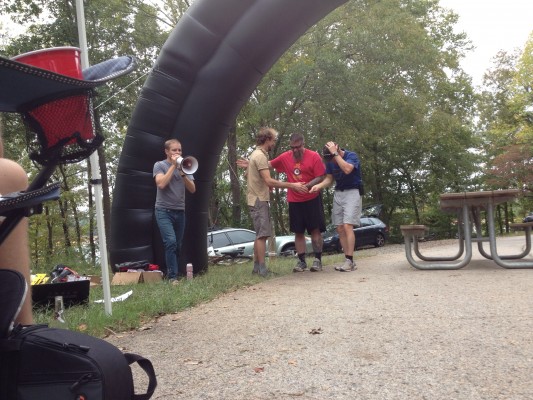 Good Guys – Jud Turpin and Chad Whitworth are two locals who helped prepare the trail for the race, and both were awarded honorary GA SS Champion belt buckles in appreciation of their efforts.  Jud gave a quick thank you speech, thanking all of us for coming and riding his trail.  No sir, thank YOU!  The passion and love these guys have for the sport and their home trail was obvious.  We need more people like them! 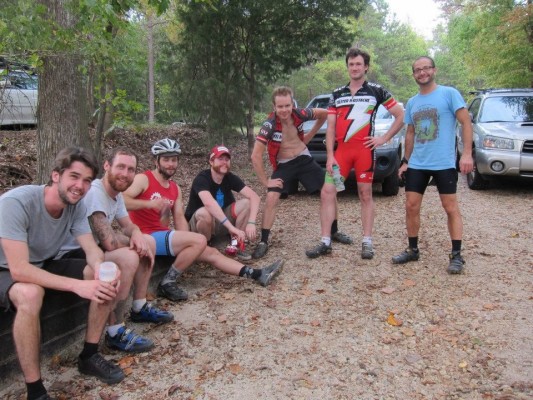 Hammer To The Line – One of the super fast guys didn’t quite understand the XC course, he thought the start line was also the finish line.  The finish line was actually where the trail dumps out into a parking lot, nearly a mile away from where we started. To be fair, even the organizers didn’t seem to always understand the course.  He was racing for a spot on the podium, and thought someone was close behind, so when he came out of the woods he never even looked up to notice everyone standing around – he kept his head down and hammered out of view all the way back to the start line.  Once he got there and saw no one else around he figured out what happened, and had to pedal all the way back to the finish to hang out.  Once again, everyone had a good laugh. 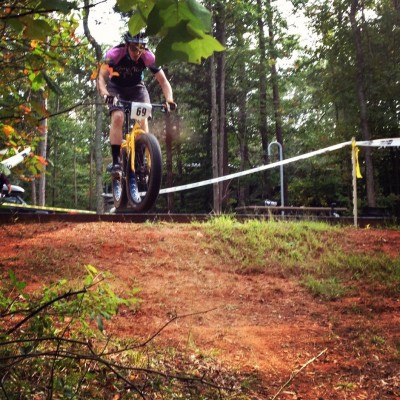 Fast Fatty – Chris Tavel of Loose Nuts Cycles out of Hotlanta showed up on a Surly Pugsley set up single speed and somehow flew on that thing!  He was fast enough to take 3rd in the short track race on Saturday.  Reportedly those giant tires had tons of traction in the fast, off-camber corners in the singletrack.  They were an obvious advantage on the beach as well. 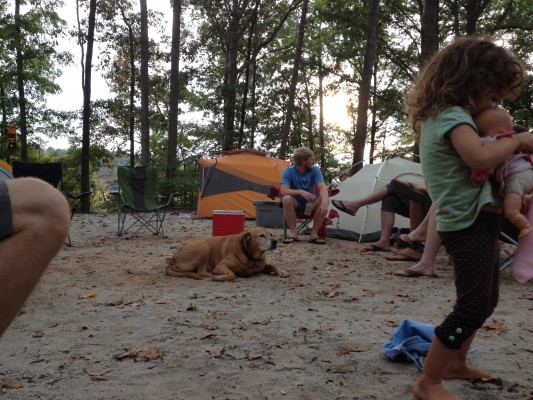 This is a pretty good summary of the weekend.

Big “Thank You!” to the Faster Mustache crew, Jud, Chad, and all the sponsors who made the weekend possible.  I’ll be back next year for sure!  Be sure and check out the Georgia State Single Speed Championship website for the full results.

Gear
The Steel Starling Spur Says Goodbye to the Derailleur, Now...
Community
3 Takeaways from Olympics MTB and Why XC is the...
Gear
Strap the Rapha Lightweight Trail Jacket to Your Frame, Just...
Gear
Fox 38 MTB Fork: Should I Upgrade From My Trusty...
Subscribe
Login
Please login to comment
7 Comments
Most Voted
Newest Oldest
Inline Feedbacks
View all comments

Great report, I’m bummed I didn’t make it out! It sounds like everyone had a good time which is what MTB is all about.

Sounds like some fun racing! I ride Paynes Creek pretty regularly as it is the closest legit trail to my inlaws. I agree with your sentiments: that is just a FAST trail! Nothing challenging, other than finding your flow and going AFAP

“Custom Awards – the gentleman who won several of the sport class races was awarded with a bag full of sand. Everyone had a good laugh.”

Love the pic of the kid on the fixed gear MTB. Does not look like that ended well. 🙂

the best racing ive ever done!!! 4 hour drive and all i can say is when can i sign up for next year??? thanks to all the awesome sponsers for a great weekend!! thanks to KISH BIKES AND CYCLE THERAPY BIKES IN NC !!!!

Great write-up. Wish it wasn’t on a work weekend for me.

Last night one of the Faster Mustache guys posted on the event’s facebook page that all the proceeds are being donated back to the trail, and will be used to get some machines in there to move some dirt around and build some berms and whatnot. Next year should be even faster!!