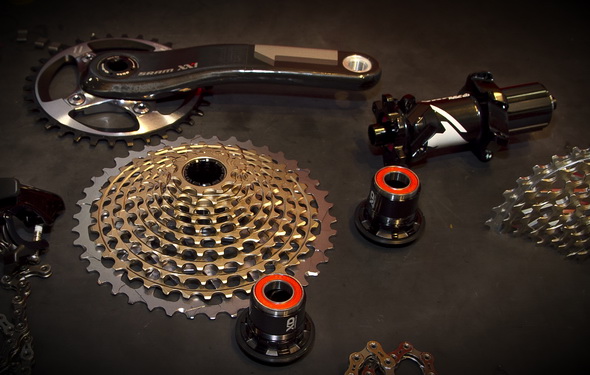 This is my last post for Interbike 2012! Interbike is so vast, that at some point it eventually becomes a veritable sea of shiny gear and gadgets. While we could literally go on and on about all of the cool new gear, I decided to narrow it down to the booths I actually visited and got additional information from. 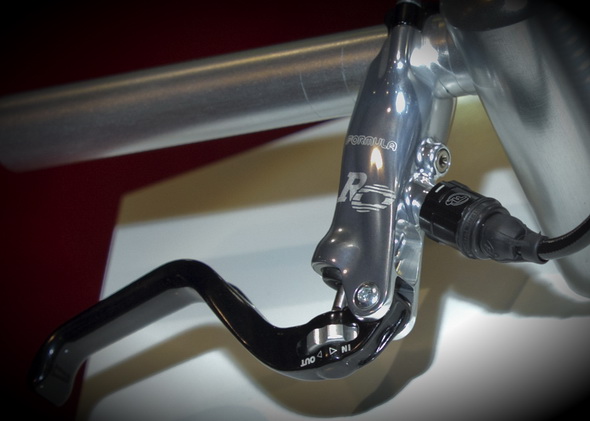 Formula was at the show displaying their brakes and other gear. These things are so shiny and so clean that they look like they belong on an operating table! I got the chance to speak with Jeff Stoudt from Formula, and we went over their brake lineup. The RO Brakes are still the top-dog stoppers, with massive single-oval pistons. The big changes are where you don’t see them–inside where the seal meets the piston. The brake’s cavity is not cut as a perfect square groove but instead is tapered which allows the seal to deflect and retract more. In other words, on every lever pull the pistons extend and retract further, making sure the pad-to-rotor clearance is greater. That, in turn, reduces the chance of rotor rub. 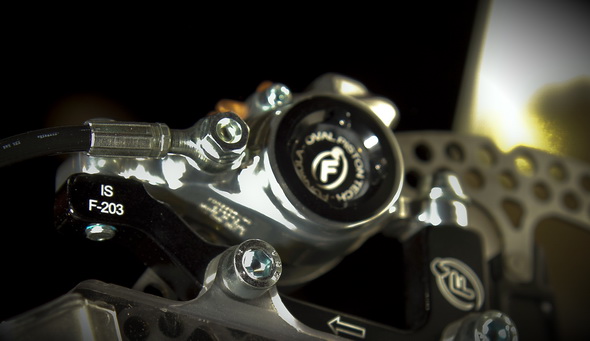 Other big changes include the improvements in the RX lever. The levers are now lighter than ever with an improved feel, and with styling cues from the R1, the RX lever has a much cleaner look. Overall size has shrunk as well, making for a compact-looking master cylinder. 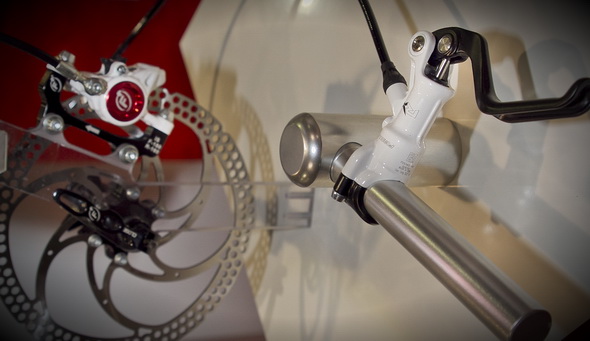 Although not shown, the biggest deal (at least for me) is the super-slick zero-loss quick release brake lines. Listen carefully manufacturers: Formula has a quick release hose fitting that is only 1mm wider in diameter than the hose, which allows you to feed the line (pre-bleed) into a frame, which then can easily connect to the lever. Talk about convenient! I used a similar setup with my race cars for easy brake service without the need to bleed. Another practical use is for those who travel often with their bikes. You can now easily quick release the bars without fear of pulling the brake lines off. 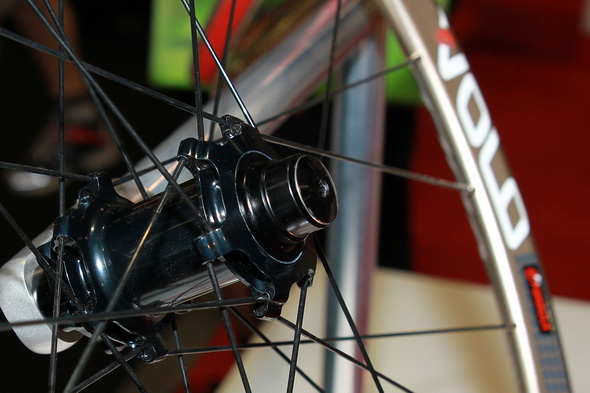 Formula is well known for their brakes, but they also produce wheels and forks. Presently they are offering XC and AM wheels in both 26 and 29-inch varieties. Typical options include QR9, QR15, and 20mm (AM only) 12/142 rear axle. Rims are constructed with Scandium and use only 24 straight-pull spokes, but Formula’s lightest wheel, the Volo XC HL, runs a carbon rim. The cassette body is worth mentioning as it uses 4-cam pawls for a quick-engaging hub. Weights vary depending on axle choice, but on the light end you’re looking at about 1200 grams, all the way up to the AM set which only weigh 1850 grams (29er) / 1657 grams (26er). 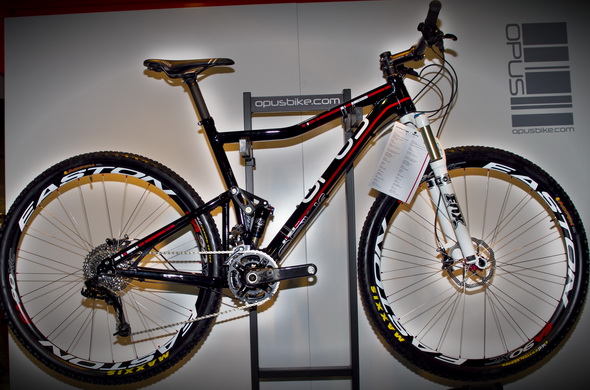 I was impressed to see that OPUS made it to the show. After speaking with Sylvain Bosse, I learned that they finally have approval to sell their bikes in the US. They had to get special approval due to the design of the linkage. 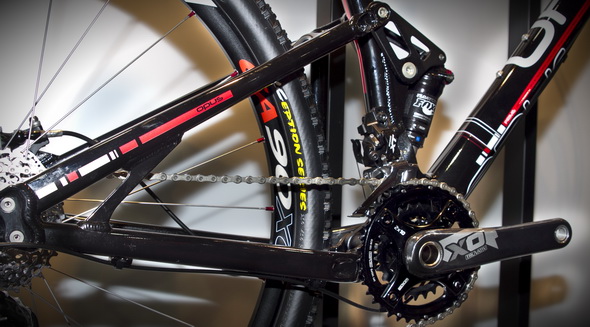 Speaking of the linkage, this floating shock design now relocates the strut from the lower chainstays to the upper stay, allowing for better mud clearance. Shown above is the Prime 29er, well-equipped with a SRAM X0 drivetrain, Fox suspension, and Easton wheels.

Look for more from Opus in the future. 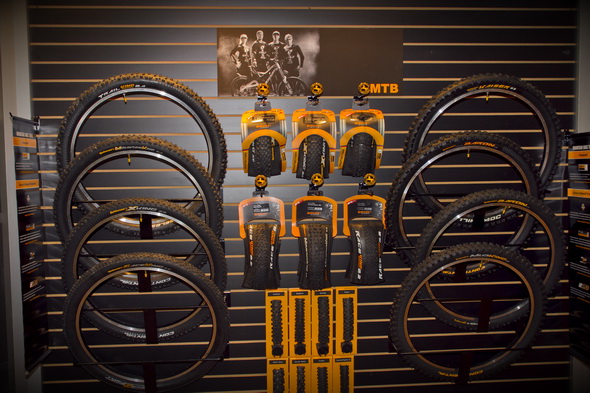 I also made a quick stop over at Continental tires. In a world dominated by machines, these tires stand out because they are hand-made. From start to finish, real people lay up the rubber, and produce winning tires. Looking at them up close I could tell they are well-built.

Continental has a plethora of tires in widths ranging from 1.8″ all the way up to 2.5″ in both 26 and 29-inch tires. Stay tuned for more from Continental or check them out yourself online. 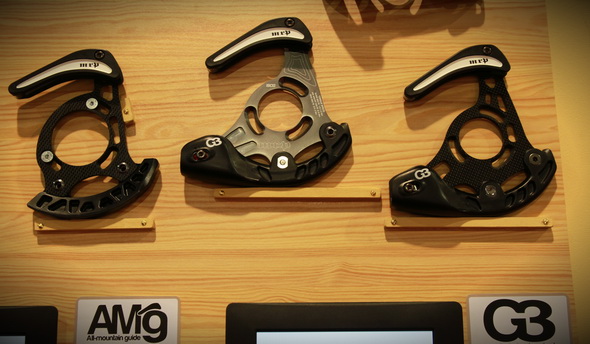 MRP was showing off their vast array of chain retention devices, with a guide for everyone. Material choice varies from their new top-shelf carbon series, down one level to an alloy version, and finally a few economical steel-backed versions. 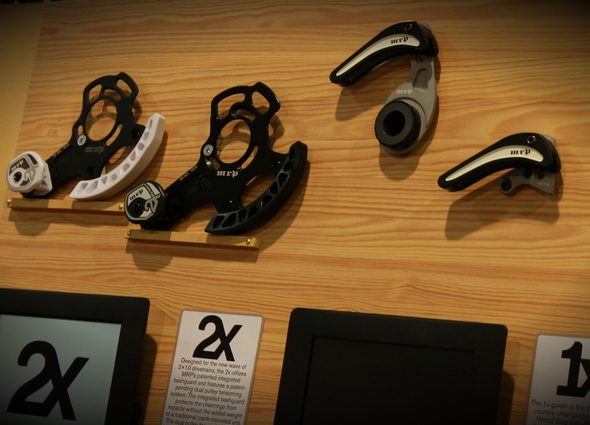 MRP also makes an array of chain retention systems for just about any drive line: chain retention is no longer just for gravity riders. From XC singlespeeds to 2X shifting systems, MRP has a guide to suit the application. I was particularly impressed with the two-by solution, using two idler pulleys or, if you prefer, rubbing blocks. 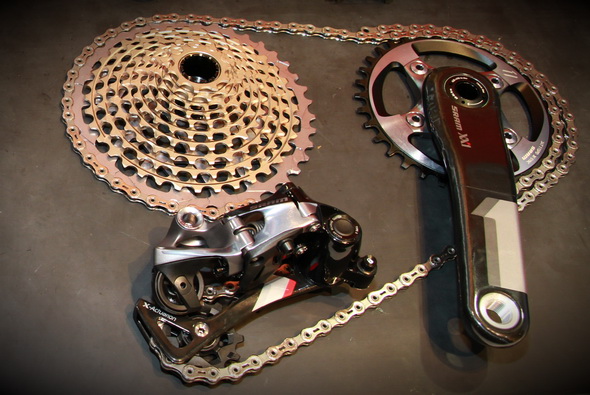 SRAM was showing off their new XX1 drivetrain (check out Jeff’s write up for more information), but not just installed on a bike. You could feel it, play with it, and really get to see how it works. This is definitely another step forward in shifting… not a total paradigm shift as some want to claim, but definitely a big step forward. I personally was impressed with the profiling of the chain ring to match the chain. The chain ring will only allow you to install the chain to the ring in proper sequence. The result is better chain retention. SRAM claims that the new chain ring and Type 2 derailleur could negate the need for a chain retention device altogether (do not confuse that with a bash guard). 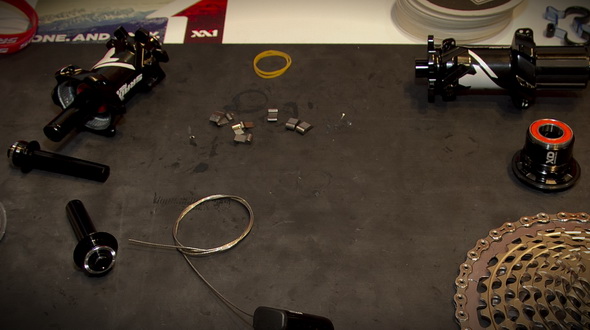 With a new rear hub (found on the Rise 60), the system allows for quick-and-easy cassette body changes from 10spd to the new 11spd cassette body, using the simple through axle sleeves. 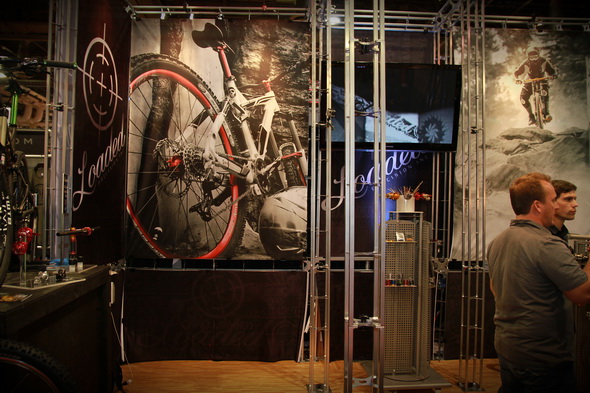 It was nice to see the guys from Loaded Precision again. This year, they had a nice, shiny booth to match their vast array of bling. It’s kinda funny, though. Many people think that Loaded is all about gravity, but after looking at the booth and talking with Anthony at Loaded, that is not the case. Even though they are known for gravity components, they do have a lot to offer the trail and XC crowd. 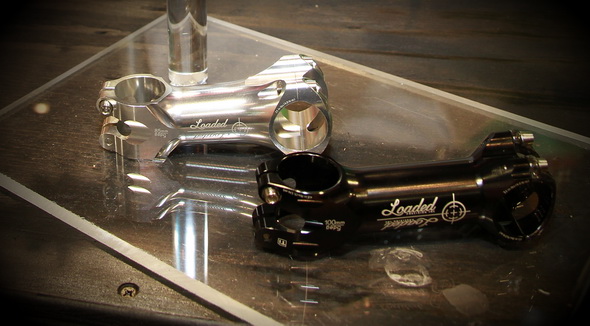 Pictured above are the AmXC and the X-lite Ti stems. Both are shockingly light. If the AmXC was sold a little shorter (I need 55mm), that would be on my bike right away. Both stems retail for less than $100. Comparing weight to cost, by industry standards this stem should cost about $200 or more. 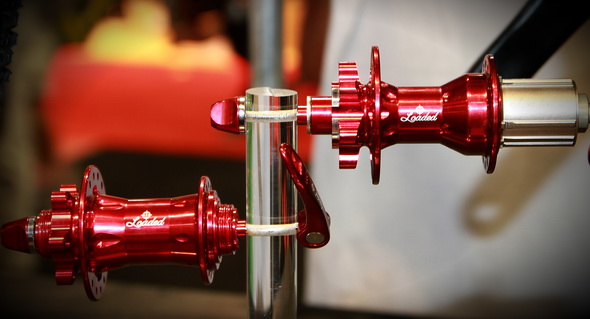 Loaded changed up the look of their hubs as well, machining out unnecessary material. The Signature series hubs can be configured to fit the most popular spacing out there today: the front comes with 9, 15, and 20mm adapters and the rear comes in 9×135,12×135, and 12x142mm spacing. 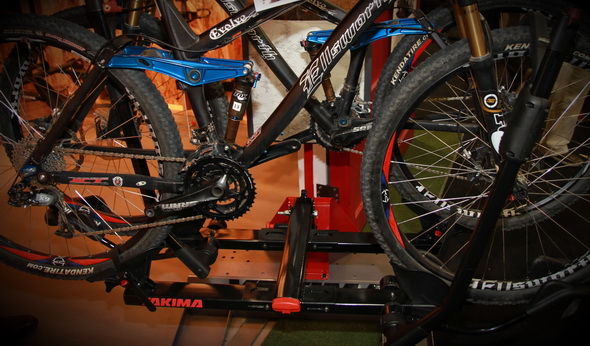 Yakima had a number of new products that caught my eye. Most impressive was the new Hold Up. I cannot tell you how annoying it can be to try to fit two DH rigs on a pallet-type bike rack. One of two things always happens: either your rear derailleurs are clanging together, or the seats are smacking the opposing handlebar. Well, the new Hold up addresses this problem by allowing you to move one or both of the bikes 2″ to the left or right. The arms that hold up the front wheel also run close to the bike it is supporting. 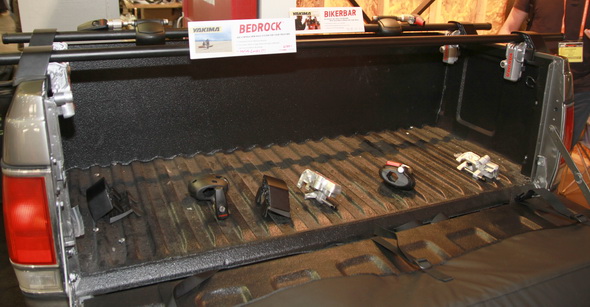 Do you have a pick-up truck and want something more secure than just a hitch mat? Well Yakima came out with a cool bar system that will easily secure itself to the truck box (locks and all), allowing you to have a set of bars and your choice of bike mount. The bars and locks will retail for approximately $199. After that, it depends on what bike mount you select. 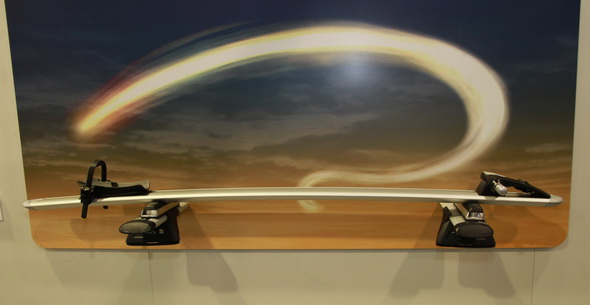 Yakima brought out this slick new roof system in 2012. Unlike other systems, these are all about style and aerodynamics. Have a Porsche Cayenne and want a rack that matches your ride? Then look no further, the Whispbar is designed to reduce drag up to 70% over previous models. Because drag is reduced, so is the amount of noise generated (not including the bikes or other items you’re carrying). What was cool about the new Whispbar was the way it cleverly locked and unlocked the bike, allowing for easy conversion of 9 or 15mm axles (no 20mm available yet, sorry). Everything about the new Whispbar is about noise reduction and ease of use. Check out Yakima’s website for more info. 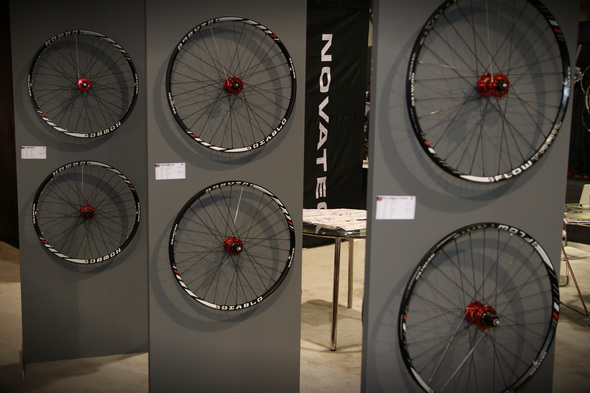 Novatec revamped all their wheels with hot transfer graphics and shot-peened surfaces for longer life and a pleasing finished look. Also, all of Novatec’s off-road wheels are tubeless-ready. One nice feature is the little steel cover for the index key on the cassette body, which I think is brilliant. Alloy cassette bodies always seem to get chewed up from the steel cogs, but the index key prevents most of that damage from happening. Novatec calls that bit of technology their A.B.G. cassette body. They also offer improved rim profiles and 6-cam pawls for tight, positive cassette engagement. With everything from 650b wheels to 29er and 26ers, Novatec is ready this year! 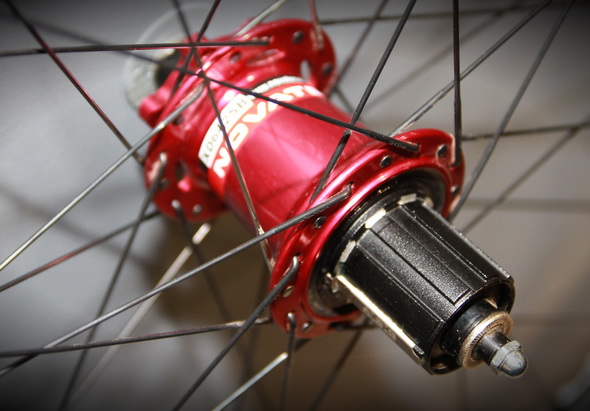 If I recall correctly, all the Intense bikes were hooped with the Novatec line of wheels. The photo below shows off both the sturdy Tracer 27.5 rig and the Novatec Diablo wheels:

Speaking of Intense, they had their shiny (or in some cases, matte) new carbon frames and bikes on display. The Carbine SL was on display, sporting a very clean carbon design, along with the other go-fast goodies, including the Spider 29er that Jeff had a chance to ride and the Hard Eddie, which is Intense’s first hardtail carbon 29er. 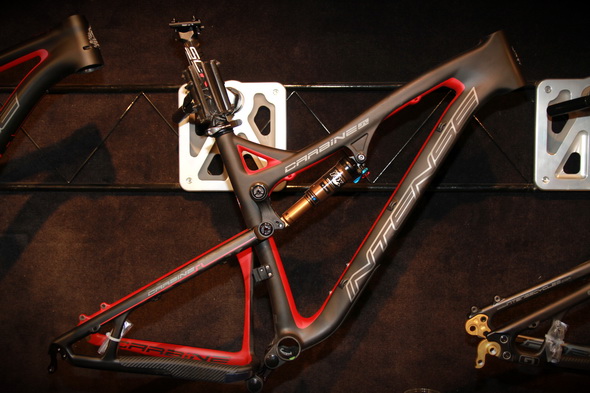 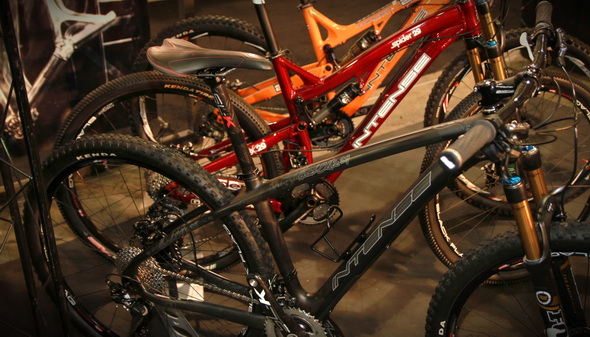 If you’re looking for all-out light weight you can even get a carbon fork for the Fast Eddie. 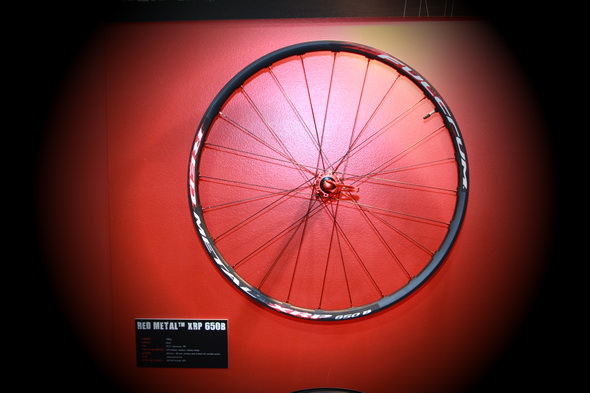 I found these 650b wheels from Fulcrum on display. When speaking with Ty from Fulcrum, the very first question I asked was when the Red Metal XRP 650b will be put in production. Sadly, there is no production date as of yet. I guess there has to be more demand, but the wheels were produced just to show that they can and will, once demand supports production.

Pictured below is the 1347 gram ultra-light Red Carbon XRP which were on display and are currently available: 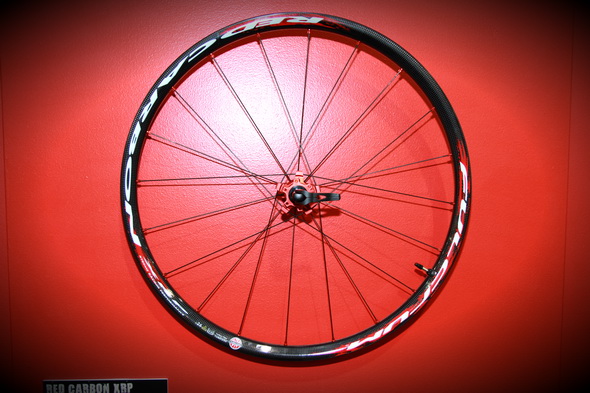 So that about wraps it up for the Singletracks.com Interbike 2012 coverage! Stay tuned for in-depth gear reviews of some of these products over the next 12 months!

The Yakima Whispbar is really cool–I must’ve missed that one at the show!

Yeah kinda the bad thing about the show..So much to see and an item like that. Even though it is really cool is kinda buried among all the shiny bikes.