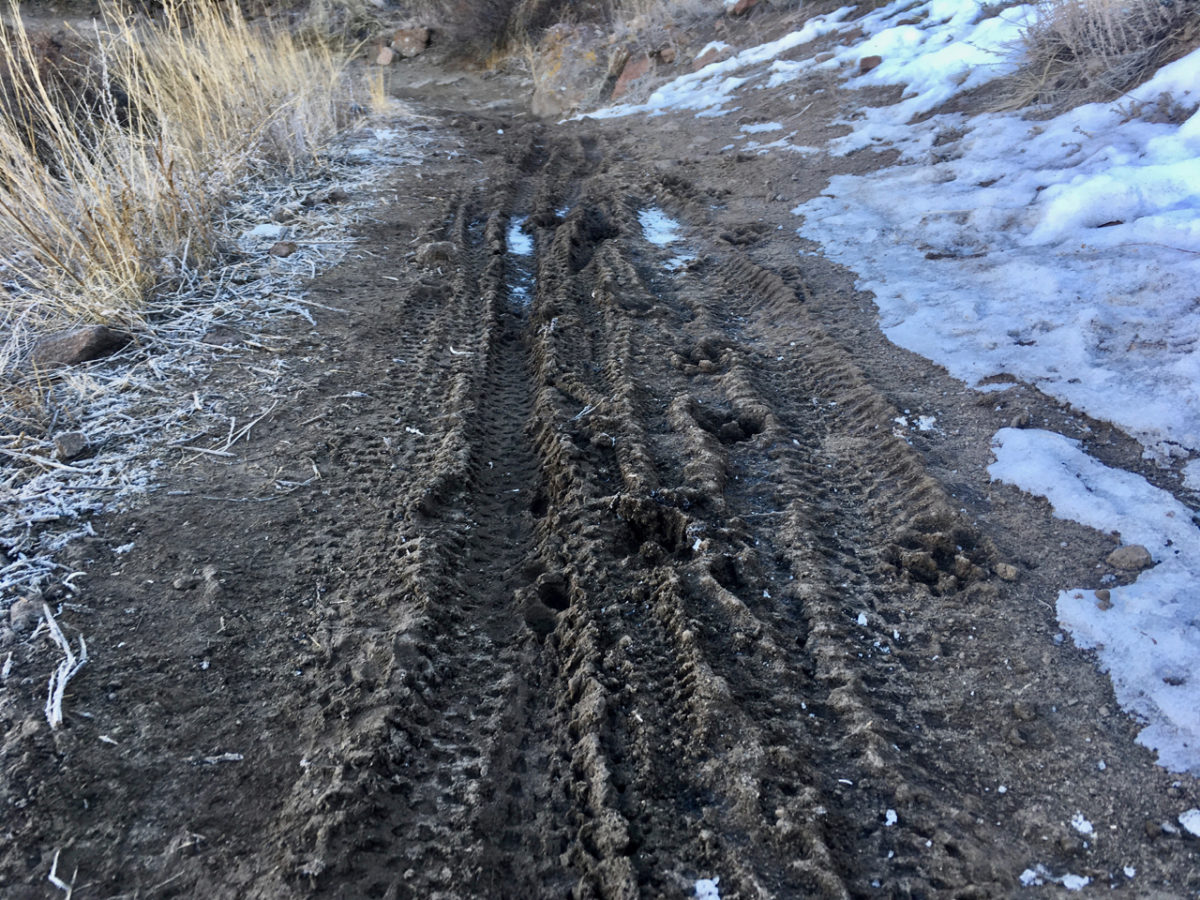 The alarm clock squawked obnoxiously at 6am, jerking me rudely from my slumber. I wiped my bleary eyes and tried to figure out what the heck was going on.

“Seriously, what is going on right now? It’s dark outside, why is my alarm going off?” But then I remembered, “Hey, I’m going riding this morning!” It had been four days since my last ride, so I was due for a sanity check, an appointment with the two-wheeled psychiatrist.

I slurped down some coffee, tossed my gear in the truck, drove into town, ran some errands, and hit the trailhead about 7am. It was colder than I expected it to be: 17 degrees. Yet, the frigid air was part of the plan.

I’ve only lived in Salida for about three and a half years, but I had quickly learned to interpret the local freeze/thaw cycles. In no time I had learned how the trails melt out after a big snow storm, and the fact that, right now, if I didn’t ride while it was frozen, I’d be leaving big ruts every time I turned into the shade. Since I had to log on and get work done later, I had decided to set my alarm for o’dark’thirty to get my much-needed singletrack time in while I wouldn’t be damaging the trails, and before I had to get to my day job.

Imagine my surprise when I began pedaling up the trail and in the second corner, I faced a long stretch of ruts. And in the third corner. The 10th corner. The 15th corner.

On and on, for miles and miles, throughout my entire ride: ruts, ruts, ruts.

And while it would be easiest to blame the mountain bikers, the tire tracks commingled with foot prints and paw prints. Oftentimes the impact from the hikers and the runners was even worse than the riders, as they attempted to step around the puddles, thereby widening the trail–making singletrack not single anymore. But really, that’s neither here nor there. Discussing who’s damaging the trails the most in muddy conditions is like asking who’s the guiltiest in a bank heist: the guy waving the gun, or the guy filling the sack with cash. They’re both guilty.

Whenever we write about riding wet trails on Singletracks, someone jumps in and starts talking about how trails in Washington are always wet. Well, that’s not what I’m talking about here. Our local in-town trail systems, specifically the Arkansas Hills Trail System in this case, is located in a high desert environment. The trails are dry and sandy almost the entire year. For a few weeks here and there they’re buried in snow (which also doesn’t hurt the trails)… the only time they’re susceptible to serious damage is for the week or two when they’re drying out after a major snow storm.

Now I won’t go so far as to say that ruts from tire tracks and foot prints significantly degrade the environment by adding silt to the streams, displacing plants, disrupting animals, etc. That’s simply not true, and even if a little dirt is displaced, it’s not significant. Stay tuned for an upcoming column on this meta topic.

Rather, the damage is to the trails themselves, and to the experience of the users on the trails. Since this trail network is dry 90% of the year, these ruts will often harden into cement-like trenches and divots, making the trail surface unpleasant and difficult to use for riders and runners alike. Riding through and around mud holes both deepens and widens them, requiring volunteers to come in with tools to repair the damage and de-berm the trail to allow it to drain again.

This is why rutting up trails is a selfish act. The trails must be repaired, or the degradation will only accelerate. So volunteers will have to selflessly give of their free time and energy in order to repair this damage, damage caused by an outing in the mountains that could have been simply taken at a different time of the day (when the trails were frozen, as I did), or in a different location (on a paved or dirt road, or on a snow-covered trail higher in elevation via a fat bike, snowshoes, or skis). There are a multitude of ways to get your exercise fix that don’t involve the destruction of a valuable community resource.

As I pedaled along, I couldn’t help but think about the amount of time and effort that will be required to fix this rampant damage, and how much new trail could be built with that same amount of energy. Instead of focusing on building brand-new singletrack, that precious volunteer labor will be spent repairing the damage caused by selfish trail users who didn’t take the time to think about the consequences of their actions.

My deepening despair reached rock bottom when I came to the newest addition to our trail system: Chicken Dinner. Salida Mountain Trails contracted Tony Boone’s professional trail building crew to craft a brand-new two-mile singletrack trail, and this would only be my second time riding it since it was opened in early December

This is no mere rake and ride: Chicken Dinner is a carefully-crafted masterpiece filled with berms, rollers, jumps, chunky sections (that will only get chunkier with time), and sweet, sweet flow. This sweet flow comes at a cost, though–the price tag on Chicken Dinner was a little over $40,000.

And my heart sank as I started seeing ruts in this brand-new $40,000 work of art.

While I have the privilege and the responsibility of serving on the board of Salida Mountain Trails and having a say in how SMT’s money is spent, this wasn’t my $40,000 that was spent on this trail.

SMT raises money from local businesses like the Boathouse Cantina. From local dues-paying community members like myself. From grants from the city, county, and state governments. Simply put, we have worked diligently as a community to save money to get this trail built, to keep expanding our world-class network of singletrack. But when I see people who apparently do not care about this investment of time and money, my heart breaks.

Thankfully as I continued down Chicken Dinner, I realized that the vast majority of the trail was south-facing and largely dried out. Thankfully, the ruts in our latest work of singletrack art were minimal. But that doesn’t negate the damage to the rest of the trail system.

The moral of the story? Ride when it’s frozen, go ride somewhere else, or don’t ride at all.

Opinion
Between 2 Triangles: The MTB Tech That's Newly and No...
Gear
Stop That Bus: A Review of the Trickstuff Direttissima 4-Piston...
Singletracks
The Best Black Friday Mountain Bike Deals [2020]
Gear
The 7 Biggest Mountain Bike Gear Trends in 2020, According...