If you spend enough years of your life riding a mountain bike, injuries become a fact of life. Instinctively, we know this. We’ve seen the endless Red Bull Rampage crash reels, reveling in the schadenfreude as we click to the next crash video, and the next. But when injury finally comes knocking on our own door, it’s not a pleasurable experience.

Over the past three years I’ve spent a lot of time sitting in my lazy boy, philosophizing about the relationship between injury, sports, employment, emotional health, life in the mountains, and life in general–an arm chair philosopher, if you will. I’ve unfortunately had all this time to think because I’ve spent the entirety of the past three years dealing with the aftermath of one injury, or another, or another. At this point, I’m losing track. I think I’m on either injury #4 or #5 in three years, depending on how you count it.

I’m going to be straight-up-honest here: being injured sucks. Having a broken body that doesn’t do what you want it to do is, in my opinion, possibly the worst affliction known to man. And the worse or more deeply-debilitating the injury or illness, such as cancer, paralysis, or any host of rare degenerative conditions, the more detrimental the affliction and its effects.

If I had my druthers, I’d rather deal with most any other obstacle or difficulty in life than physical injury. Because whatever other negative experiences you’re forced to deal with in life take place outside of your own personal being. Financial difficulties forcing you to work long hours, not able to pay the bills, don’t know where your next rent payment is coming from? Yeah, that sucks, but if you’re fit and healthy, you still have that going for you. Interpersonal strife, damaged or severed relationships, divorce? None of these are fun, but again, your own personal being remains unaffected. The death of a friend or loved one? Horrible, but again, your own life carries on, and your faculties are in tact.

Caveat: the other life difficulty in this comparison would, obviously, have to be on a similar level to the physical injury or illness. For instance, having the bank foreclose on your home is obviously worse than spraining your ankle. But getting paralyzed from the waist down? I’d take foreclosure and bankruptcy any day, thank you.

All of these great life traumas can of course affect you in many ways, including emotional trauma that could even boil over into physical maladies as a result of that stress. But if your body is still whole and your own person is still intact, no matter what else happens in life, you can cling to that. Or at least, I can cling to that. I can’t claim to speak for anyone else in this column, aside from myself, so take it for what it’s worth.

But if my body is whole, I have an outlet. I have a healthy way to cope with these other stressors that are outside of my control, because I have something that is within my control: my own physical exertions.

Almost as long as I can remember, I have used physical exercise as a way to cope with other stresses–whether financial, relational, you name it. I would take that energy, that out-of-control feeling, and channel it into movement. Whether it was furiously sprinting around town on my commuter bike as a high schooler, strapping on the headlamp and going for a run in the middle of the night as a college student, or hopping on my mountain bike and pedaling off into the woods in the present day, I’ve always turned to exercise as a way to process my thoughts and feelings and deal with negative energy. This is just one reason that I have to ride to live.

But when I’m injured, the entire game changes. What functions as my emotional escape is now off limits. One of my primary skills for earning a living is not currently usable. In these moments, the injury is causing negative emotions to arise, and it’s also preventing them from being dealt with in the way that I know best.

So what, then, can you do in such a moment?

Personally, I’ve found that when it comes to overcoming an injury, I can only focus on what I can do. What actions are within my control. But I also know that as a result of how I’m wired, giving up just isn’t an option.

Giving Up Isn’t an Option

After months of daily physical therapy, stretching, and generally putting myself through as much (or more) pain than a mountain bike ride with none of the fun that comes from riding, giving up on recovery can start to seem like an attractive out. “I don’t need my knee to work all that well,” I’ve caught myself thinking. “Heck, it doesn’t hurt if I just stay right here in the lazy boy. I’ve got a beer, the TV remote, my iPhone… what else do you need in life?!”

Right in the midst of one of these dark seasons, part of an interview with Travis Pastrana went viral on Facebook. If you don’t know who Travis Pastrana is… well, I don’t think we can be friends, but watch this video for a bit of background:

What you don’t see in the ESPN highlights is how many times Pastrana has gotten injured. Like, seriously injured. Like, could very easily have died, injured. Some have referred to him as one of the most injured extreme sports athletes ever, but despite these setbacks, Pastrana still keeps plugging away.

In the video that went viral, Pastrana talks about his motivation for continuing to do these crazy stunts and eXtreme (with a capital X) sports:

Here’s what he said:

“When I was hurt the most I could ever be hurt, I passed out. I woke up, and I passed out. I bled two thirds of my blood volume and almost died. And at that moment, even lying there getting a blood transfusion, not sure exactly what’s wrong, not being able to move my legs, all I could think about was, ‘Man, I hope I get better, so I can try that again.” And that might be crazy, that might be stupid, but… I would never stop doing something because I’m afraid to get injured when, even when I’m injured, in the most pain that I’ve ever been in, the most disappointed I was wasn’t that I was hurt, but that I wasn’t able to do what I love.”

This brief clip resonated with me deeply, and I took away three very important lessons:

1. It could always be worse.

No matter how injured I’ve been over the past three years, it could always be worse. While I have had to go under the knife, I’ve never come nearly as close to dying as Pastrana has. And even Pastrana, in his own way, expressed gratitude in this and other interviews that he is still able to go on doing what he loves. Even though he literally doesn’t have an ACL in one of his knees anymore and seems to constantly be recovering from the latest in a string of bad crashes, he hasn’t died, he hasn’t gotten paralyzed, and he continues to do what he loves.

2. Giving up on therapy isn’t an option.

Through all of my recent injuries, the goal that I’ve held fast in my mind was that all of the physical therapy, all of the doctors appointments, the surgeries and the waiting–the point of all of this was to get back to doing what I love. As I wrote about in a previous column, I ride to live–I love this sport that we partake in, and my life wouldn’t be the same without it.

3. Quitting a sport isn’t the solution. 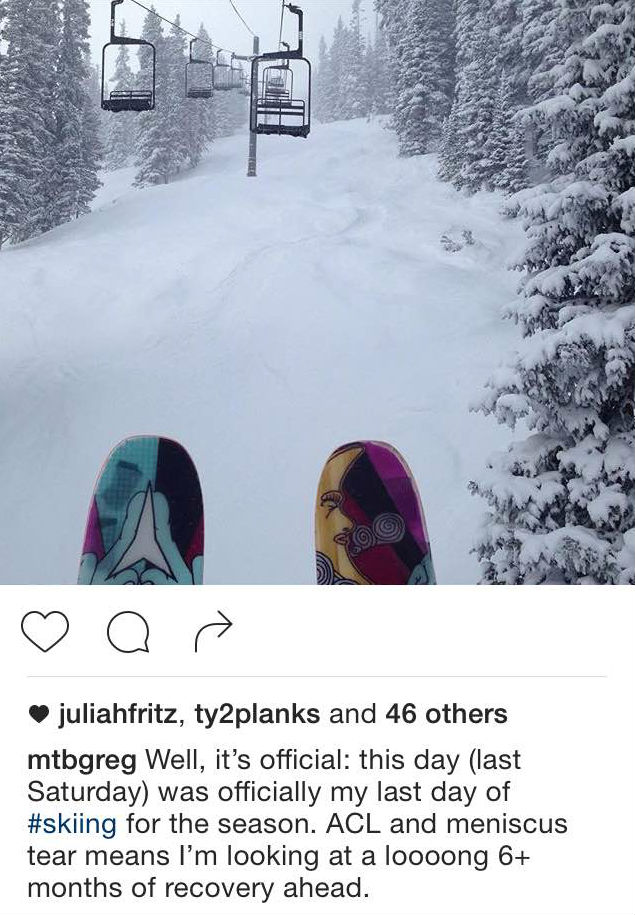 During the six months following my torn ACL, I mentally grappled with what, for me, was a question so profound, so contrary to the core of my being, that I never thought I would ask it–but then there I was: “Should I quit downhill skiing?”

The question wasn’t so much whether or not I loved skiing–heck, I only started mountain biking in an attempt to find something interesting to do when there wasn’t any snow on the ground. But rather, the question was whether or not the risk of getting injured again was worth the enjoyment that I get from skiing.

After listening to Pastrana’s interview I realized that yeah, maybe I could try to insulate myself from injury by “playing it safe,” but with so many of my other injuries over the years resulting from freak accidents or relatively benign situations, even avoiding so-called extreme sports is no guarantee that I won’t get injured.

And more importantly, I love skiing. I freaking love it. It strikes a chord deep in my soul, the same one that mountain biking strikes, just in a different way.

I wish that I could conclude this article by saying that all of the effort has paid off and that I’ve moved past all of my injuries and achieved 100% recovery, but unfortunately, that would be a lie. Even as I write this, I prep for yet another doctor’s appointment this afternoon and a possible MRI.

And while I would love to tie a neat bow of a conclusion on this package, while dealing with injury may be one of the most difficult challenges I’ve ever faced, I do know one thing at least.

No matter how painful it gets, no matter how long the road ahead is, giving up isn’t an option.