Those who have followed my articles know I originally published under the pseudonym “Skibum.” Indeed, I was a downhill skiing fanatic long before I even thought about mountain biking.  In fact, mountain biking was a sport I originally took up to minimize the boredom that occurred between skiing seasons.  But I quickly became equally, and eventually even more, obsessed with riding knobbies than riding two sticks.

In recent years, I no longer welcome winter the way I used to and on any given day, given a choice between the two activities, I’d be more likely to opt for mountain biking.  Upon realizing this, I decided some reflection was in order to figure out why the shift occurred. Upon this reflection, I was able to identify eight reasons mountain biking is better than skiing (and snowboarding).

You might not think of “overhead” as a concept applicable to recreational activities, but conceptually, it actually fits perfectly.  Businessdictionary.com defines “overhead” as a “resource consumed or lost in completing a process, that does not contribute directly to the end-product.” As applied here, the resource in question is our most precious resource of all:  time.

When skiing, I spend a lot of time not skiing. The bane of skiing is lift lines, which consume time not skiing.  Even if you’re lucky enough to be able to ski at a time when lines are short or nonexistent (usually midweek and at a less desirable ski area), then there’s the time spent actually riding the lift–again, not skiing.  A 10-minute lift ride up may deliver one-to-two minutes of actual skiing before you’re back in the lift line.

On the other hand, when you’re riding, you’re riding; there’s no time spent waiting for your ride to the top of the mountain—your bike is your ride to the top. Sure, you may stop along the way to smell the roses, admire the view, or just commune with your biking brethren, but it’s entirely optional; downhill skiing overhead is much more mandatory. We’re supposed to get more patient as we get older, but I find I have far less tolerance for standing in line than I used to. I just want to go, and I can do that on the bike.

Although it’s called “mountain biking,” mountains, while awesome, aren’t mandatory.  You can mountain bike in the desert, the jungle, or even on the prairie, as well as any mountains you can find. Downhill skiing, on the other hand, requires mountains. There is quality mountain biking to be found in every state in the union, but not so with skiing.

A number of states have no skiing at all, and the skiing in most of them is second-rate at best.  I have skied at Bottineau Winter Park in North Dakota with its gentle slopes and 200ft vertical drop.  Meanwhile, North Dakota has the IMBA Epic Maah Daah Hey Trail, one of the nation’s great singletrack routes. In the Mid-Atlantic, states like Pennsylvania draw a few skiers to minor ski hills who go there only because it’s the only skiing available, while the Allegrippis trail network gets raves from all who set their knobbies there.

In addition to the concept of anywhere, there is the concept of “anywhen.”  Skiing is limited to the winter months, while much of the country can cycle year round, or close to it. That’s without a fat bike; with a fat bike, the activity truly becomes year-round for all of us.  Each year, I really have to put in an effort to get in double-digit days on the slopes, but I have no problem whatsoever putting in triple-digit days on the bike.

Riding alone can be a special experience, as can riding with a friend or group. Downhill skiing is a blast with friends, not so much on your own. Sure, you can strike up a conversation with someone else in the lift line or on the chair, but that’s a poor substitute for truly sharing the experience.

On the other hand, a solo mountain bike ride can be a cathartic, even spiritual experience. But you’re never truly alone at a ski area. When you ski alone, you get neither the pleasure of solitude, nor the joy of communion; it can be the worst of both worlds.  In cycling solo, especially if in a remote area, you can achieve solitude and the benefits that come with it.

While the opportunities to mountain bike resorts, parks, and trails punctuated with man-made features are increasing in quality and quantity, mountain biking will always offer the opportunity to ride with a minimum of artificial development.  To this day, my favorite trails are narrow, devoid of bike-specific features, and predate the activity of mountain biking itself.  Skiing is ever increasing in its development, with bigger, faster lifts, grander lodges, terrain parks, half pipes, on top of things which have always been a part of skiing like wide trail cutting and trail grooming.  Biking provides the opportunity to ride in a much more natural environment, allowing for a true backcountry experience. 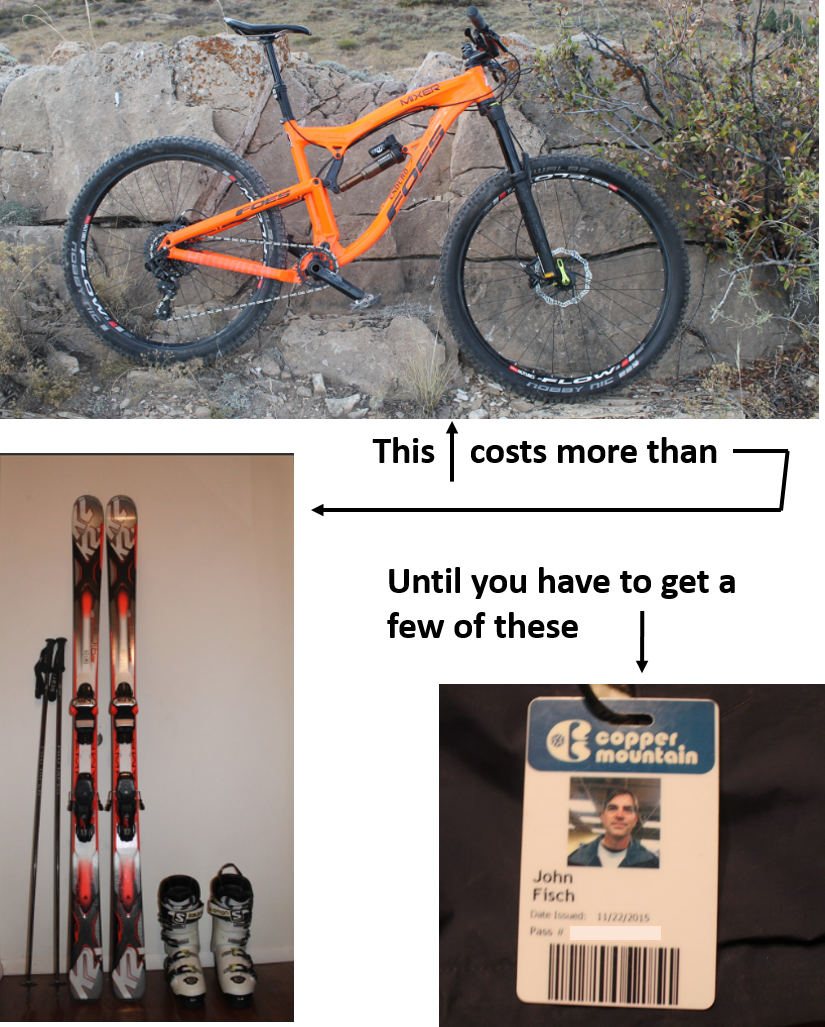 To be honest, this one can go either way, depending on the level of equipment chosen and how often and where one rides.  A top of the line ski setup (skis, bindings, boots, poles) will run slightly less than a mid-level bike.  However, once the initial investment in equipment is made, things shift dramatically.  Once we’ve got our bike, we can ride (most) trails for free.

But lift tickets are expensive.

For the 2016-2017 season, a full-price, single-day lift ticket at Vail is . . . gulp . . . $189!  Of course, there are discounts to be had and season passes offer a far better per-day price for most.  But even going that route, a season pass at most any resort worth skiing will run $600 or more.  Do the math: if you have your mountain bike and your skis 10 years each, you will spend upwards of $6,000 to be able to ride those skis vs. as little as $0 to be able to ride the bike (not counting equipment maintenance, which is higher for the bike).  For that kind of money, you can have a few bikes with some nice upgrades.  Moreover, the season pass only clears you for the resort(s) actually on the pass, while you can take your bike anywhere.

7. Doing it after Dark

Night skiing is limited to those slopes which are lit, which is very few.  What’s more, only the easier, mostly-groomed slopes are lit.  Since you bring your own lighting with you when night riding on a bike, you can ride any trail after dark that you could in the day.  Rounding this reason out is the wonderful sensation that night riding provides, unique from and often every bit as entertaining as day riding, while night skiing is a pale imitation of its daylight counterpart.

Aggressive skiing will work you.  It can be rather tiring–exhausting, actually.  Banging moguls all day or charging through deep powder will work both muscles and lungs and if you don’t finish a ski day significantly fatigued, you weren’t really skiing.  That said, for all its challenge and physical taxation, skiing is not the type of physical activity that truly promotes fitness. It is not aerobic, like cycling.  Then, there’s all that down time: the time “overhead” referred to above.

Of course, the upside for me is that these two activities are not mutually exclusive, and I’ve worked hard to be able to live in a place where I can do both.  In fact, I have done both in the same day: skiing in the spring sun until it turned the slopes to slush, then driving down in elevation to dry trails and hopping on the bike.

But when I want the best recreational output for my effort input, the bike enters my mind first.

Access to both activities is a key driver in my decision where to live, but if I was forced to relocate, keeping proximity to great mountain biking would be far easier than keeping proximity to great skiing. Understanding the resource inputs/benefits, and the various access issues, has brought me to an understanding of why mountain biking has become my number one activity.