Out & Back
Trail Description
About this trail
The Opihi River Track, also known as the Fairlie Walkway, is primarily a walking track but makes a nice beginners mountain bike trail. It follows the bank of the Opihi River and is wide unless overgrown. It's flat and just a little bumpy. It's never far from the river so on a hot day you'll be able to take a swim or at least a paddle since it's not a deep river. The track has a little scenic interest but no technical interest. Ride down till you've had enough then turn around and ride back the way you came.

When I rode it in late 2015, tree falls made it impassable after about five kilometres. Hopefully it will be all clear when you get there
added by Jim Cummings 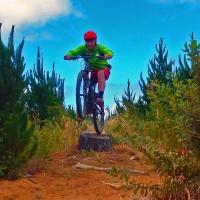 Review: If you're in Fairlie at any stage, you could do a lot worse than take the whole family for a ride along the Opihi River Trail.