Q: price of this bike -Guest 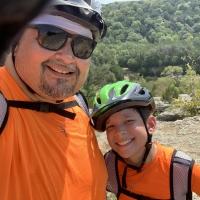 Recommendation: Very good beginner bike. Solid build for people just getting onto the trail. However aspects like steel frame make it not the bike for someone who has been riding before. Got this bike for my GF starting to ride, overall she loves it!

Pros: Solid frame, great for all around riding

Cons: Requires updates to components, but what bikes don't?

Recommendation: Bought this this bike to share with my son. I converted it to a single speed for commuting to work, my son beats it up around the neighborhood. We take it on MTB trails, and is solid all around. Not a bike I have to worry about other than routine maintenance.

Cons: gear shifter on left handle allows rider to push past the 3 level causing the chain to be pushed off the spokes.

Recommendation: Great bike for the price.

Pros: easy to learn on
forgiving of mistakes
solid frame

Recommendation: I'm a beginning MTB'er with a 6 y.o. 820 which was given to me in '10 and it's definitely a great bike to learn on. Yes, it's heavy - that's why once you learn to control (and move) it you've really got some good basics and conditioning under your belt to take to the next level.

Recommendation: This is a good beginning MTB. It is durable and can handle a lot. However, it is heavy and not so good for rugged or technical terrain. The shocks are very tight and make for a rough ride.

Pros: Cheap, strong frame, gets you riding and you don't have to worry about it breaking like a XMart bike

Recommendation: I rode this bike hard for 631 miles last year. Being 6'4" and 250# And those were hard singletrack miles. The bike was not intended for hard mountain bike use, however mine did. Mine weight 33 lbs. The frame was a little small and that's the reason I sold it. Not because it was a bad bike. If fact the guys that bought it from me rides mountain bike trails to and it is still working. The components did need an adjustment once in a while but big deal. Fact of the matter it is a great bike, cheap, held up to a fat man riding it hard. =)

Cons: Derailleur, after a while I had trouble with my rear gears. Can't upgrade to disc brakes up front.

Recommendation: Excellent bike for the price! Stock is great for the average rider, but if you are a bit more serious about trails I would suggest replacing tires, shocks and derailleurs like I did. Perfect for beginners who purchase with intent to upgrade.

Cons: you get what you pay for
cheap components

Recommendation: this bike lasted a couple of months without any major problems but the components are bottom line

Cons: It is a little heavy and the shock/fork has no adjustment to it.

Recommendation: Its trully a great starter bike. Its strong, durable, capable, and as fast as you are. Its made of steel so it can take quite a few hits which is great if you're new to the sport. However that also means its also a bit on the heavy side but this can be useful in some situations like rocks or roots. Its got great stiffness and its not bad on climbs. The tires are designed for a bit off pavement riding and they can loose some of that traction in sketchy situations so its not a bad idea to get some new, more legit tires. But with that said the default tires actualy have great traction on the roads and the whole set up makes it a great commuter bike. One last thing, it is made out of steel so it can rust up. If you get scratches on the handle bars, down tube, top tube, whatever... it will rust if you let it sit in a west environment. All in all, Its a great bike and you should at least give it a test ride before you set your mind on getting a different bike.

Recommendation: This bike can take a beating, maybe a few upgrades here and there but overall a great bike.