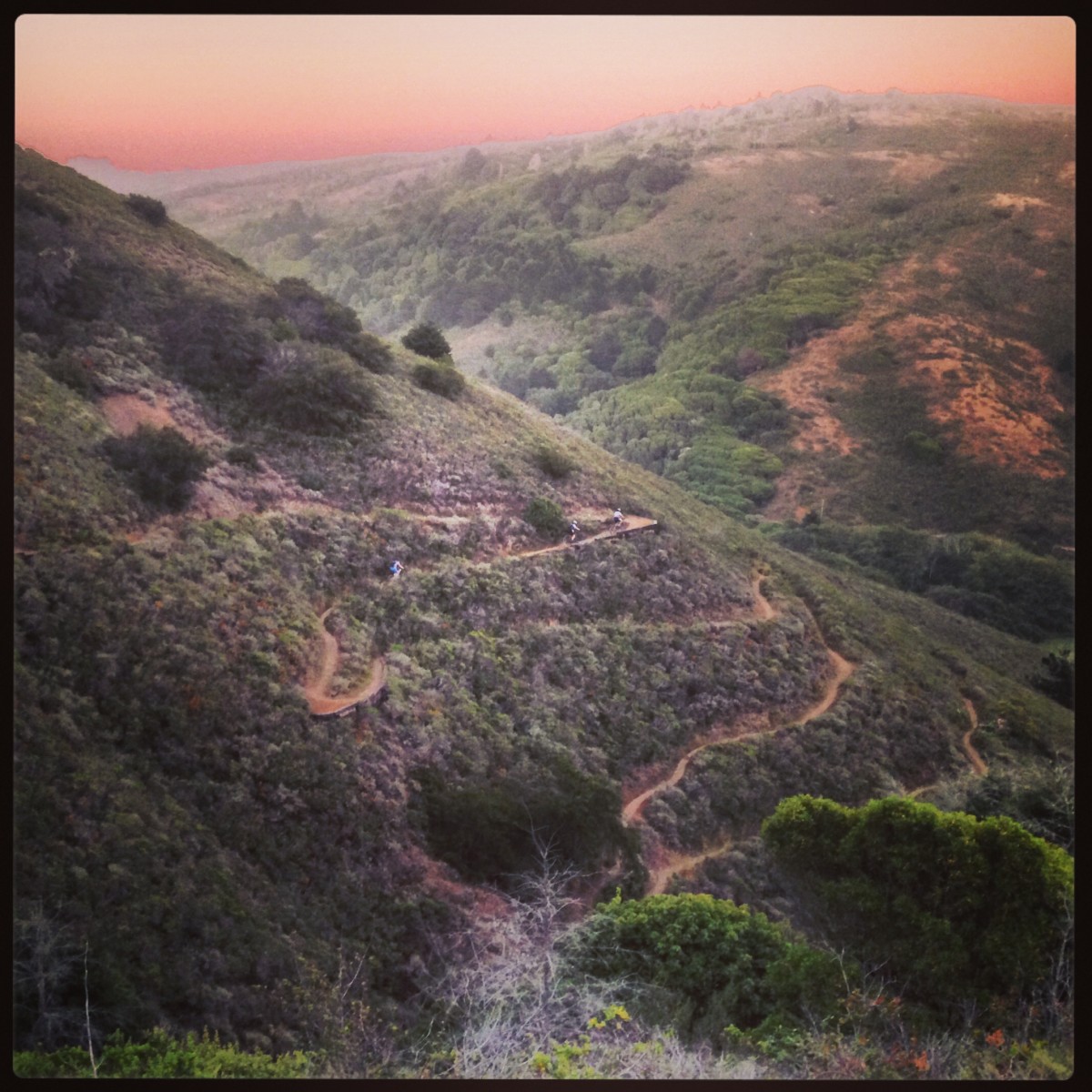 Tim started bellowing at me before the car had come to a complete stop, before his feet actually hit the ground.

Have you ever been on a family or other camping trip in a singletrack mecca with your beloved mountain bike in tow and had to ride the path round the lake ‘cause it just wasn’t that kind of trip? Sure you have. Here’s a redemption story.

My brother Tim is developmentally disabled. He is 58 years old, but functions somewhere between eight and ten. He looks normal—6’ 1”, blue eyes, slightly balding—but it doesn’t take long to realize he’s not. He’ll shake your hand and say hello, but before long he’ll ask you in a too loud voice if you a) have a boyfriend (if you are female), or b) know anything about lawnmowers (if you are male). Though Tim’s faculties stopped expanding much after third grade, his libido bloomed quite robustly. Thus, Tim is a full-grown man who laughs uproariously at his own fart jokes, quotes Donald Duck, and cartoonishly ogles every female who crosses his path.

Tim has ridden all his life on account of never having received a driver’s license, though mostly around town. And most bikes get stolen from him either ’cause he left it in front of the liquor store “for just a minute” or because he invited that nice drug dealer guy to live with him “for just a few days.” After setting up camp basics under Tim’s anxious commentary (“So, now? Are we… going?  Like, five minutes or what?”), my brother Rob and I suited up. Tim rolled up the right leg of his jeans so they wouldn’t catch in the chain, and exposed a calf so pasty white it was almost blue. He took one last drag off the drawn-to-the-bone Marlboro before throwing a leg over his 46-pound “Iron Horse” mountain bike from Walmart.

“It’s not about me, it’s not about me…” I repeated internally in a Zen-like mantra. We shoved off and arrived at “I have a flat” town in precisely 87 seconds.

Not only do cheap piece-of-crap bikes get more flats and mechanicals than a Harley Davidson, they are harder to fix in degrees inversely proportional to their cost. The comical cascade of calamities began with the flat, proceeded to the can’t-remove-wheel-cause-it’s-rusted-to-the-frame phase, on to the broke-a-spoke-with-the-tire-iron phase, and ended with the bastard-won’t-hold-air-for-mysterious-Walmart-related-reasons phase. Once these required steps had been faithfully executed, we proceeded, approximately one hour later. 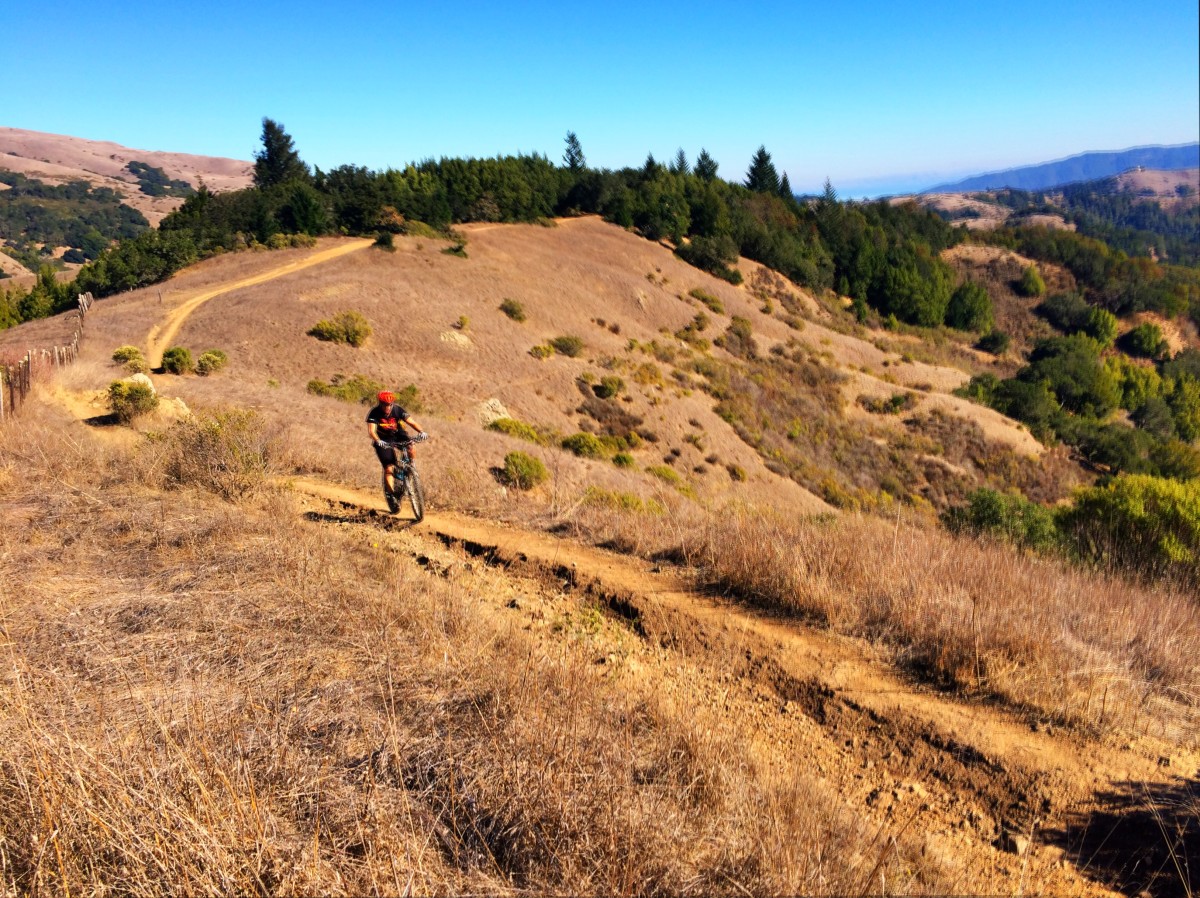 After ten minutes on fire road we stopped for a view of some distant mountains. I asked Tim how it was going. It was good to be on the bike and I sincerely hoped he was enjoying himself, as these family gatherings were always fraught.

He sniffed, wiped at his nose with his shaking left hand. The drugs they put him on when he started hearing voices gave him a wicked tremor.

“Can we go on the trails in the forest?”

I looked at Rob, he at me. Inside a hot minute fern fronds were tickling our tires, the sun’s rays were tempered by the ancient wood. The trail stretched on through redwood needles, fern grottos, and crossed creeks on rough-hewn bridges built by the WPA—the Works Progress Administration—in a time when government employed the eager hands of the destitute and created great soaring achievements in infrastructure, art, literature, music…and trails.

Tim rode that clapped-out Iron Horse like it was a tricked-out race bike. He seemed to levitate there in front of me, his whole body emanating a silvery haze that outlined him against the dark forest backdrop. His quaking left hand was solid, fluid, strong, and relaxed. It partnered with the arm and shoulder in a way it hadn’t since the voices began, since the Zyprexa moved in to his system and took over certain operations. On a tricky log section spanning a brook, I was sure he was destined to kiss the redwood carpet, or receive a good soaking at the very least. Instead he accelerated, deftly reached out with his newly-empowered left hand and pushed lightly off a thousand-year-old redwood tree that corrected his course and sent him blissfully onward. A shimmering outline of his hand flickered on the striated bark.

While charging at a duff-filled corner with his newfound mad skills, I watched, horrified, as his rear wheel went south while his front went east/west in rapid succession. It unfolded in slow motion, as these things are wont to do. His lanky arms pushed out in front of him. He reached down, and the ground reached up, as it is wont to do. The look on his face mid-arc was comical. Both Rob and I had worn it often and well—the crash face. One must, of course, stifle the chuckle until the post-crash inventory is taken.

I didn’t have “Are you okay?” completed before he was extolling, “I ate shit! I ate shit! Did you see that? I ate some serious shit!” all the while laughing like a freaking maniac, shooting pine needles out of his slightly-bloodied mouth. Rob heaved him to his feet and fetched the spectacularly catawampus bicycle from the adjacent shrubbery. A disgruntled newt, ejected from his home in the fray, shuffled across the trail and gave us the newtonian stink-eye.

“Yeah you kinda overcooked that corner, eh Tim?” said Rob, slapping him on the back now that a trip to the hospital had been ruled out.

“Yeah, I overcooked the hell out of it!”

We finished the loop adjacent to a meadow and made our way back to camp, the Iron Horse tamed, and my brother emanating a rare glow of happiness. For the rest of the night around the campfire, and throughout the rest of the trip, Tim would spontaneously erupt “Hey Rob! I overcooked it!” or “Hey Tigger! I ate some serious shit, right?” Cigarettes, alcohol, drugs, and a life on the edges of society had slowly whittled away Tim’s physical prowess, confidence, and joie de vivre. But here, at age 58, in the woods of Northern California, a chord had been struck. And the sound was beautiful.

This is probably my favorite story of the year–thanks for sharing!

Thanks for y’alls kind words!

Beautiful story, thanks for sharing.
I have twin brothers with more profound mental disabilities and I would LOVE to be able to take them for a ride. Cherish your ride time with Tim.

That was a wonderful story, Maureen. Thanks for sharing.

As much as we all love biking, it seems that nothing beats taking someone like Tim (such a rare opportunity) or a teenager or a kid biking. It truly is better to give than to receive. Thanks for the great story Maureen and letting us into your life a little. My wife has an older brother who is 54 and five years old or so in his development. He is not normal, and because of him rarely is a day in the household normal. Life is a kick with James in our lives. It’s “messy” much of the time dealing with him, but he make those around him better people. And it just keeps us all laughing … … most of the time. =)

Very true Mongwolf–thanks for your kind words and insight.

Such a powerful story, and so beautifully written! Thanks for sharing Maureen!!!

Maureen: Mega-dittoes here on your powerful and uplifting story!!

The best things in life ARE free and the power of sharing with others truly changes lives for the better.

Sounds like great memories. Hopefully we have more adventures with Tim in the future!!!