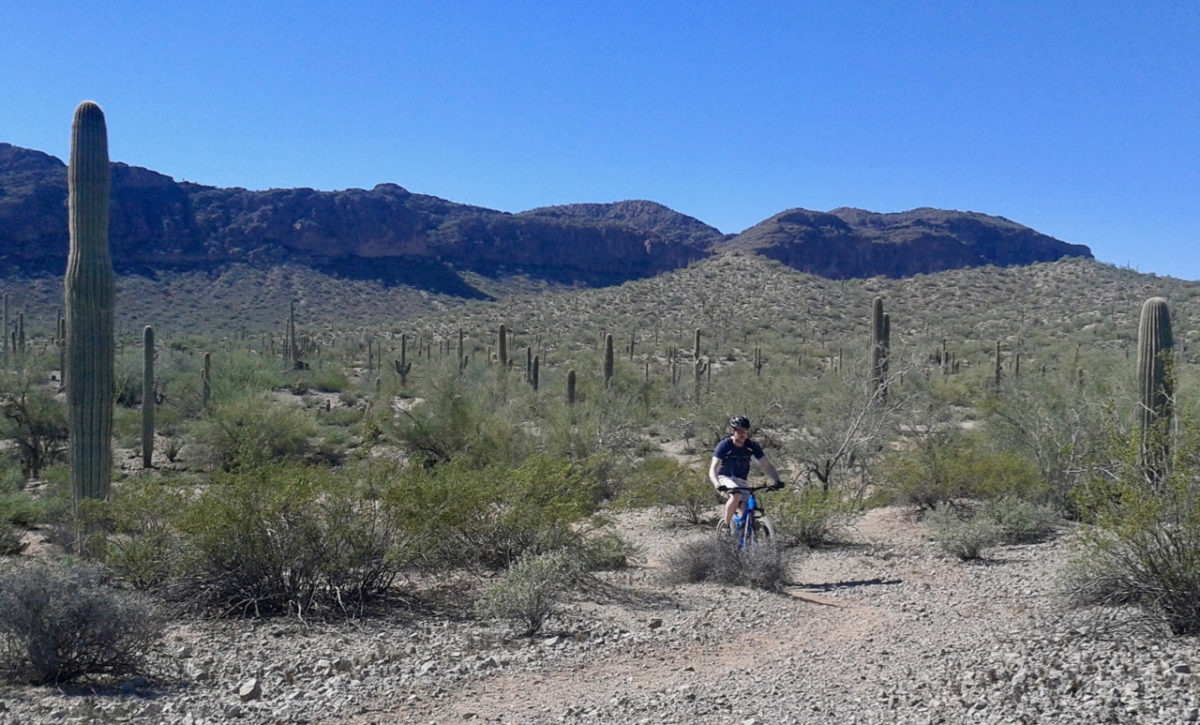 “Don’t move,” said a stranger with a look of concern. “The ambulance is on its way.” My ears heard the words. I saw the faces. But, like a tired rider climbing a long hill, I was lagging far behind.

“Yeah, stay very still,” said another. “Don’t move your neck or head. Don’t move at all.”

After a few blinks of my eyes, a few more people came into view. Maybe eight. “OK, this is weird,” I thought. I felt like Han Solo waking up from a bout of hibernation sickness. Where was I? What was going on here?

They were looking straight down on me from six feet above in a semi-circle. Instinctively, my body stayed motionless as I laid flat on my back. It was oddly quiet, peaceful, and calm. 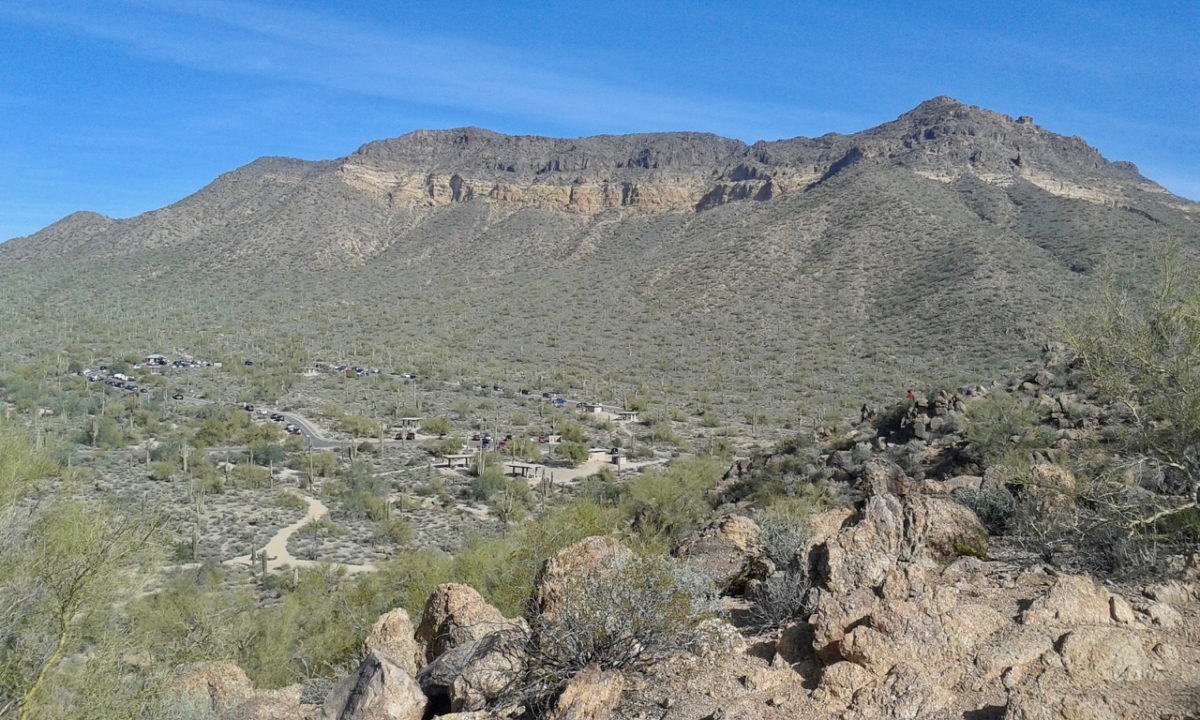 I soaked up my surroundings: blue sky, white clouds. Rocks. Bushes. Cacti. I could hear the crackle of gravel sliding beneath peoples’ feet. The sun sure felt warm on my skin, but boy I hurt.

I was mountain biking in Arizona and had landed on my head. Landed hard.

People sometimes describe mountain biking as a religion, a sickness, or even an addiction. The latter makes sense I guess: you get high and then you crash. People do that. My relationship with mountain biking, however, evolved over the years.

At first, I was in it for the challenge and excitement. In 2005 I bought an unused Trek 820 from a friend who had won it in a raffle. For $125 I got a shiny silver-and-blue-heavy-steel-framed-hardtail monstrosity. Literally the cheapest (and ugliest) mountain bike they made. My co-worker and bike friend John (BFJ) had a Gary Fisher hardtail, and we started to ride. And ride. And ride. Thus the adventure began.

Almost 50 times in a nine-month stretch we explored trail after trail in the Phoenix metro area–two to three hours at a time, anywhere from five to 18 miles a trip. Some easy. Some epic. All fun. If you have never been to the Valley of the Sun, it’s an oasis of sorts for mountain bikers in an urban area. A flat desert valley sprinkled generously with bushes, trees, and cacti as far as the eye can see, it’s the mountains that are distinctive. Rising 500 to 1,000 feet above the rest of the valley floor, these reddish-brown Mars-like rock protrusions at first appear random and out of place. But we, of the Two-Wheel Clan, know they were placed there by the Gods of Bike. Amen to that. 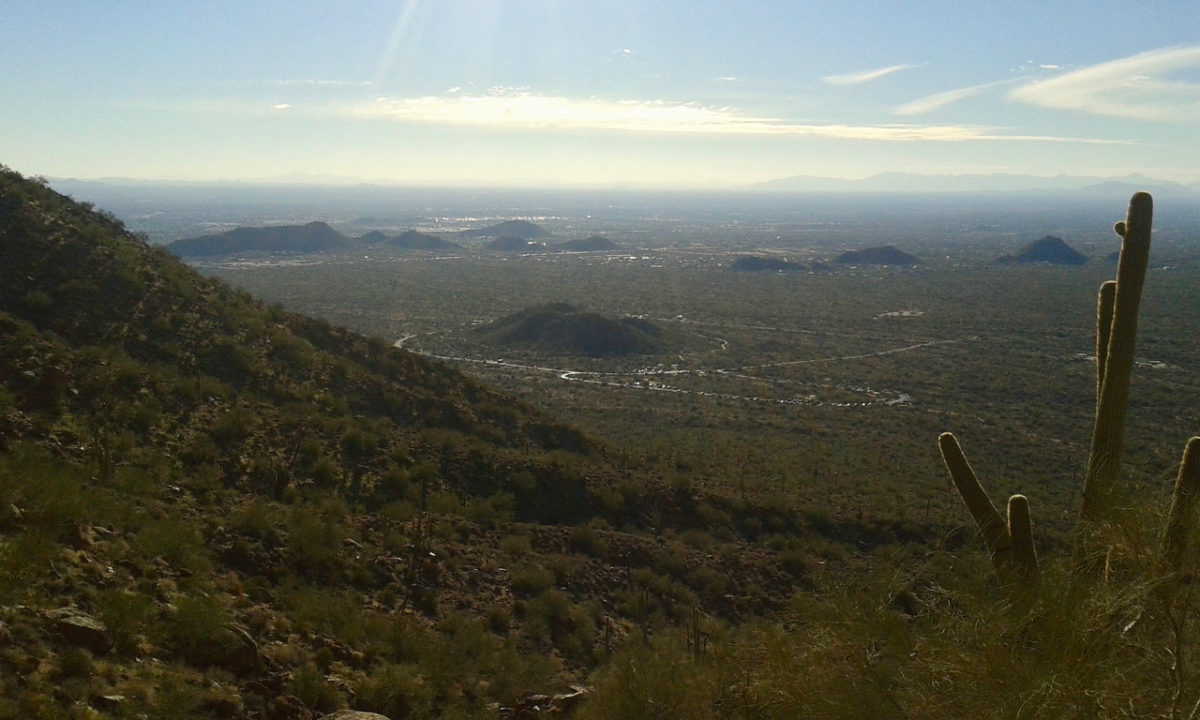 When it got hot that summer (we’re talking oppressive Arizona 110-degree-type hot), we drank our weight in water, rode super early in the morning or as the sun set, or went to Tucson or Sedona (where the sun was slightly less brutal).

It quickly became obvious that I was really good at two different things: crashing without killing myself (not as easy as it sounds) and completing technical uphill sections. Blessed with the body of a short T-Rex (thick, strong legs and tiny, little arms) I could somehow churn myself up some hellacious climbs with fury and precision.

I wrecked so often, however, that we created a new “semi-wrecking” term called a “flop” to ease my bruised ego. A flop involved quickly dismounting right before a wreck and landing on your feet, leaving your bike behind and avoiding injury. I visited the doctor a couple times (once for a badly sprained wrist, another time for whiplash of all things) and had an assortment of other scrapes and bruises, but those were wrecks. Mostly I flopped.

In hindsight, BFJ and I were riding trails above the level of my bike and skills (and loving every minute of it). I was pretty fortunate to survive.

During that year my long-time girlfriend and I parted ways, and I poured that pain into my rides, crushing it with each stroke of the pedals. Riding became my therapy of choice, and it was effective. Biking healed me. I rode on.

After another solid year of riding in 2006, it became clear that this cowboy needed a new horse to ride, so I put the Trek out to pasture as a commuter (bless its heart) and bought a new full suspension Specialized FSR XC for $1,300. I knew people spent two or three times that for a bike, but it was more than sufficient for my needs. My goodness, in my mind it was like going from a Pinto to a Porsche. The flops went down and my skills went up. I rarely wrecked any more. My newlywed wife surprisingly-enough encouraged the purchase (I did, after all, learn to ballroom dance as we courted). Life was good. I was 36. 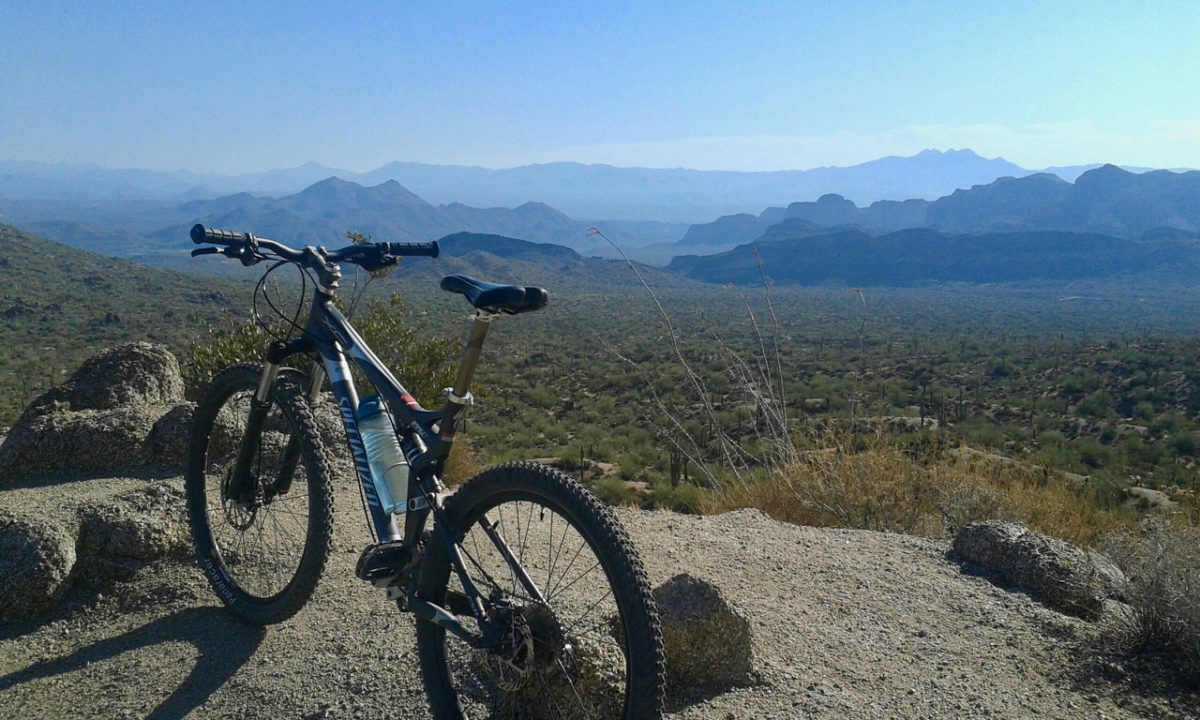 Five years and two kids later, I still biked, but I slowly went from two or three rides a month to about 12 a year. Family, work, church, bills–biking took a back seat now, and I was OK with that. Times and seasons. We all find our balance.

I now rode more mellow trails that were fast, fun, and free. Usually going solo, I enjoyed the solitude and peace found in the flow of a long uninterrupted ride or the redemption of conquering a hill that had eluded me in the past.

That brought me to October 2011. BFJ and I decided to meet up again and ride Desert Classic. It’s an 18 mile out-and-back ride on the south side of South Mountain that goes east to west and back. It’s a relatively flat fast singletrack trail at the base of the mountain (and parallel to it) with only one small mile-long technical and hilly section towards the end of the nine-mile turnaround point. It’s long, but otherwise a beginner-type trail. We were half done. Checking the clock, I knew I needed to get home soon, so I decided to hammer my way back to our cars at the trailhead.

That was the last thing I remember.

According to the jogger, I came bombing down a hill and around a blind corner before almost plowing into him. Stopping my bike in an instant, all that speed and surprisingly-immense force rotated me violently over the handlebars, and drove me headfirst into the ground like an angry jackhammer. The jogger went untouched. My mind, however, literally smashed into the inside of my skull. I still don’t recall any of it.

BFJ wasn’t far behind, and said he saw me lying on the ground in a fetal position.

“You were convulsing as if having a seizure . . . You were simultaneously hyperventilating and snoring. Weird, right? When you regained consciousness, you were in a state of shock as evidenced by having no short-term memory. You kept asking the same question over and over… It was creepy…”

911 was called. A group gathered. A couple of them had a medical background and kept me still. The first thing I recalled was stupidly asking, “How’s my bike?”

I was placed in a C-collar and strapped to a gurney-like contraption with one wheel on the bottom. With four firemen as my chauffeurs, they pushed and pulled me up and over a mile’s worth of singletrack back to the nearest street, where my ambulance awaited. When the paramedic looked at my helmet, he saw several cracks. “Good thing you wore this. You would have died without it.”

After a CT scan confirmed I had not broken my neck or cracked my skull, I was released from the E.R. six hours later. I figured “I’m fine,” but as I got up from my hospital bed to leave, I passed out and collapsed back on the mattress. My wife and nurse kept me from falling to the floor.

The next three weeks were especially awful. With a nasty concussion, dislocated collarbone, badly bruised chest, and a damaged nerve in my back, I dismally took the prescribed hydrocodone and slept. That’s it. Headaches, dizziness, sensitivity to light and sound. I passed out a few more times and couldn’t always remember things. Sometimes it would take a while to formulate my words when I spoke. This was not exactly the best condition to be in as the dad of two kids under four. My wife deserves an award for patiently taking care of all three of us. On the fourth week, my brain seemed to clear, but my collarbone injury was gonna take a while. I couldn’t even sit without intense pain and ended up missing over three months of work as a result.

Despite all this, like the nerd I am, my first question for the orthopedist each time I saw him was, “When can I bike again?” 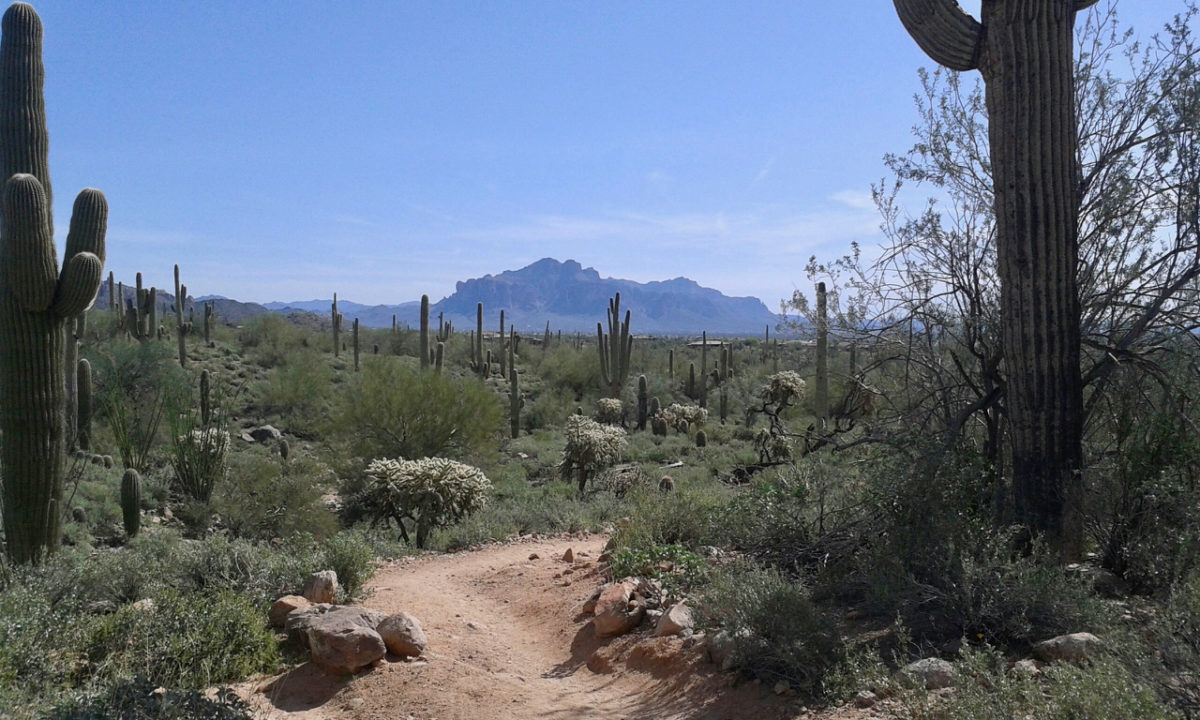 A full six months after the wreck I was back on the Specialized (with the Doc’s approval, of course), doing the same trail, studying how I crashed and what I could have done to prevent it.

A few of my friends and family thought I should consider giving up mountain biking. My wife was concerned. What really hit me the hardest, though, was when my four-year old daughter began to cry when I mentioned heading out to the mountain again. She assumed all rides ended in the hospital.

Despite all these challenges, I found a balance and learned to incorporate biking into my family life in non-emergency room ways. My kids learned to ride rather young, and now they, along with my wife, like to scoot around the neighborhood, along desert canals, and even up and down the dirt pumptrack nearby. We’ve gone on family bike rides, long hikes, spelunking, and have jumped in swimming holes. I still mountain bike regularly, and who knows, maybe one day they will too?

That will be the next adventure.

This essay is the 3rd place winner in our #TrailTales essay contest. A big thanks to Zoic, Smith, Full Windsor, and Five Ten for sponsoring the contest!

Ray Southwick
Ray began mountain biking in 2005 in the Phoenix area, though he sometimes rides in Sedona, Tucson, and Las Vegas as well. Of average skills and limited bike-spending means, Ray proves that even with the predictable chaos of everyday family life, busy dads can (and should) bike too. He currently resides in Gilbert, Arizona with his patient wife and two very energetic young kids.